Alter-Ego
Drago Maximus also known as Drago L4 is the alter-ego and evolution of the main protagonist Drago and the true main protagonist in Bakugan Battle Planet. He is the strongest form of Drago when Dan Kouzo uses the Maximus Evolution by evolving Drago from L3 into the ultimate strongest form of Drago called Dragonoid Maximus which is the stronger Bakugan who can take down the Bakuzoned Bakugans and Tiko in order to save the world from being Bakuzoned caused by the V-Virus which makes Bakugans go berserk with red eyes and infected.

Just like Drago, he is voiced by Jason Deline who also voices his original counterpart Drago from Bakugan Battle Brawlers.

Drago Maximus was seen in the flash back when Tiko saw Drago evolving into Titan Drago also called Drago L3, he recognizes the roar and wings, and mentionned the name Maximus.

In the episode, Drago evolves into Drago Maximus to defeat Nillious, later on, he manages to defeat the Bakuzoned Hydranoid and the Tiko-possessed Benton Dusk to free Benton and Hydranoid from the V-Virus spell placed upon them. Drago manages to find that Tiko was an golden Bakugan who got corrupted by the V-Virus and turned into a Bakugan Zombie called Bakuzon. Drago, helped by Dan and his friends manages to defeat Tiko and remove the V-Virus from him, turning him into a healed-state Bakugan, restoring the Earth and Vestroia back to normal. With the V-Virus finally gone, Drago reverts back to his normal self with the help of his friends, thus saving the world after the fully-redeemed Tiko decides to make peace with Bakugans and humans by counting on The Awesome Ones and their friends before fading away to finally take an peaceful rest thanks to Pyravian. 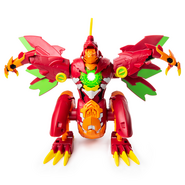 Drago evolves into his Maximus form. 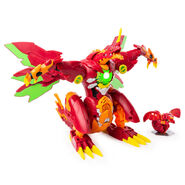 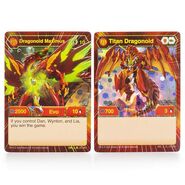 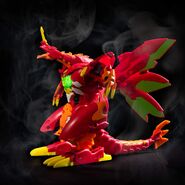 Drago about to attack

Drago is ready to attack
Add a photo to this gallery
Retrieved from "https://hero.fandom.com/wiki/Drago_Maximus?oldid=1831334"
Community content is available under CC-BY-SA unless otherwise noted.