Guarding Fiona and her hoard & eating anyone who enters her castle (formely), being with her mate, Donkey and her children

Although uncredited she was voiced by Frank Welker.

Dragon was a giant, magenta-red female dragon who guarded the derelict castle which serves as Princess Fiona’s prison. She had presumably been placed in this role by the Fairy Godmother so that her son Prince Charming could rescue Fiona and marry her and in return, dragon would eat the other knights who tried to rescue Fiona.

It can be assumed that this is her long-time, permanent domicile, since the tower houses a large hoard of treasure and happens to be littered with the bones and armor of many unsuccessful knights who died trying to rescue Fiona.

While searching for the princess, Shrek and Donkey become separated within the castle. Dragon traps Donkey on a stone pinnacle, initially intent on eating him so many other intruders. Out of desperation, Donkey smooth talks Dragon with compliments, causing her to become infatuated and spare his life.

Dragon hauls an unwilling Donkey to her chambers which contain her valuable hoard. She then wraps Donkey up in her tail to prevent him from escaping and attempts to flirt with him, stroking him, nuzzling him and licking his tail. Her attraction initially appears quite one-sided, but this does little to dissuade her and she then puckers her lips and proceeds to attempt to give donkey a big smooch. Unfortunately, Shrek intervenes right at that moment to rescue his companion and knocks him out of her tail, leading Dragon to accidentally kiss his butt. Understandably infuriated, Dragon resumes her rampage, but Shrek manages to collar her with a hanging lamp attached to a heavy chain. This gambit saves Shrek, Donkey and Fiona by preventing Dragon from pursuing them across the bridge. Dragon is left alone and devastated.

Later, Shrek and Donkey break up their friendship because Shrek mistakenly believes Donkey and Fiona had called him ugly. A brooding Donkey discovers Dragon, weeping with loneliness by a brook. While her escape from the castle is unexplained, Dragon clearly has no wish to return to her old life, or even her hoard. Feeling sorry for her, Donkey overcomes his initial hesitation and approaches the forlorn woman, whereupon the two reconcile and become a couple.

A tamed Dragon helps Shrek and Donkey prevent Fiona’s wedding to Farquaad by flying them to Duloc. Upon landing, Donkey tells Dragon to have fun – which entails her chasing off some local knights. However, Shrek’s failure to rescue Fiona from Lord Farquaad’s clutches prompt the Ogre to whistle for Dragon. At this point, Dragon intervenes by smashing through a glass window, breaking through the glass and devouring Farquaad. The glass then shattered from Dragon's body weight simply crashing through the window. Donkey, riding her head, threatens the assembly by claiming "I have a dragon here and I'm not afraid to use it". This restores peace, since everyone present is glad to be rid of Farquaad, as well as being frightened of a dragon who simply smashed the glass window and completely destroyed it (Dragon vandalized the place by smashing the windows). He is later seen again in her stomach, but the events of Shrek 4-D confirm his inevitable death by digestion.

This was also the first time Dragon had ever smashed through glass, however shortly after she punches her fist through another glass window, breaking it into pieces. Dragon became notorious for breaking of glass which she promised never to do again.

During Shrek and Fiona’s wedding celebration at the swamp, Dragon cavorts with the rest of the fairy tale creatures. As the newlyweds leave in their carriage, she catches the bouquet thrown by Fiona and lovingly presents the flowers to an embarrassed Donkey.

A later karaoke number was produced for the CD of Shrek. One scene features the two lovebirds performing a song-and-dance. While Donkey sings a rendition of Baby Got Back, Dragon provocatively shakes her backside at the camera – eventually knocking her boyfriend off his feet with her swaying tail.

This short film was produced as the audio-visual media of a Universal Studios ride, but it was released as an additional featurette along with the original Shrek film. Dragon has a prominent role in this production, first taking Shrek and Fiona on her back to their honeymoon hotel, and then helping the pair and Donkey to get away from an animated dragon statue magically brought to life by the ghost of Lord Farquaad. Dragon's aerial maneuvers through a narrow defile causes the pursuing stone dragon to break its wings off, effectively terminating the chase. Dragon saves them again as they plunge over a waterfall, and ultimately, incinerates Farquaad's ghost with her fiery breath, finally finishing the job she began when she swallowed him in the first Shrek film.

While not stated, this film implies that Dragon and Donkey got married at some point following the events of Shrek. In the beginning, Dragon is only briefly mentioned by Donkey to be acting 'all moody and stuff'. She does not appear until the very end of the film – accompanied by her and Donkey’s hybrid children.

This inclusion was made when fans attending pre-screenings complained about the character’s absence from the film. Initially, Dragon was intended to have a more meaningful role in the original storyline. When the other main characters were changed into more beautiful or heroic characters by Fairy Godmother's magic happily ever after potion, Dragon was supposed to change into a beautiful female Pegasus, the perfect match to Donkey's transformation into a handsome stallion. But these ideas were dropped, and Dragon only makes a cameo appearance in the post-credit scene, where she proudly introduces her offspring to their father.

The "mutant children" are hybrids with mostly donkey features, but sporting dragon wings, tails, resulting in an ability to fly and breathe fire. There is some confusion as to whether the babies were hatched or born. On one hand, Dragon’s eggs can be seen in a spin-off video game. On the other, Donkey’s confusion about his wife’s 'moodiness' suggests pregnancy.

Dragon plays a more consistent role in this film. Her child-rearing responsibilities prevent her from accompanying Shrek and Donkey on their quest, choosing instead to stay behind with Fiona and the other princesses.

Despite her size and ferocity, Dragon gets captured relatively easily by Prince Charming and his allies during their attempt to take over the kingdom of Far Far Away. It is probable that she submits due to the capture of her smaller and more vulnerable children, who are then locked up in the zoo.

Once the Dronkeys are released, Dragon joins the battle to recapture the Kingdom, turning the tide by tipping over a model tower that traps Prince Charming.

She and her family can be seen during the credits sequence, living alongside and interacting with Shrek and Fiona’s newborn children.

Along with other characters, Dragon, Donkey and the Dronkeys show up uninvited at Shrek's home on Christmas Eve, where they create chaos with their antiques. Dragon nearly burns the house down when she tries to light the chimney, unwisely blasting a huge ball of flame from her mouth.

Throughout the special, Dragon pokes her head into Shrek's home through the window, but cannot join the others due to her large size. She also appears in Donkey’s story for Christmas.

At the film's beginning, Dragon flies Shrek's family and Donkey from their swamp to the Kingdom of Far Far Away to celebrate the Ogre Triplets’ first birthday. Later in the film, within the alternative universe created by Shrek’s absence, Dragon remains absent until the climax.

Dragon’s reappearance occurs when Rumpelstilskin releases her to devour Shrek and Fiona, now chained to the walls. No explanation is given for how Dragon was captured. Having never met Donkey, Dragon recognises neither her husband nor her friends.

Donkey and Puss save Shrek and Fiona by dropping part of a huge disco ball on the dragon’s head, but this stops her only temporarily. In desperation, Shrek encourages Donkey to "woo" Dragon. Donkey goes to the point of kissing the female, but her only response is to gobble him up instead. Before Donkey gets swallowed, Puss sticks Dragon in the backside with his sword, causing her to bellow and spit her prey out. Humorously, Donkey misinterprets this predatory act as some form of “kiss” and happily shouts out “I'll call you!” Dragon then continues to hunt Shrek and Fiona but gets thwarted by them and ends up muzzled and trussed up in chains.

At the end of the film, with the original universe restored, Dragon returns to her normal, more benign personality. Both she and Donkey remained a happily married couple. The ensuing Shrek karaoke scene even features Dragon playfully gobbling her husband without swallowing, contrasting the parallel world and underlining the love and depth of their relationship. 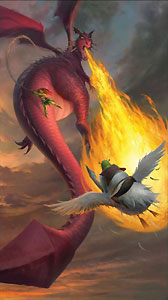 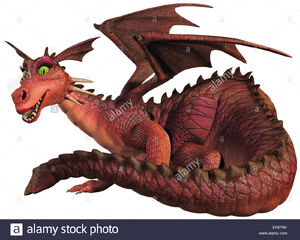 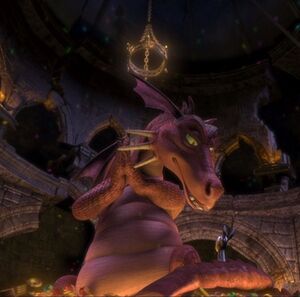 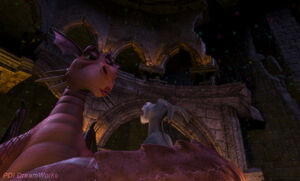 Dragon attempts to give Donkey a big smooch. 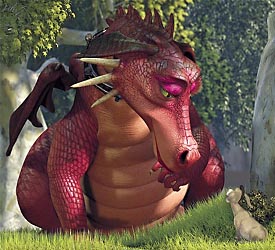 Dragon nuzzles Donkey
Add a photo to this gallery

Retrieved from "https://hero.fandom.com/wiki/Dragon_(Shrek)?oldid=1466376"
Community content is available under CC-BY-SA unless otherwise noted.