Millions of years ago.

The Dragon Clan (龍の一族) is the line from which the people of the Hayabusa Ninja Clan including their leader Ryu Hayabusa are descended.

Sworn to defend the world and all humanity from the horrors of the dark forces, the Dragon Clan has kept a vigil over the most powerful and even the most dangerous artifacts known to man.

The Dragon Clan's most prominent warrior descendants produced from the House of Hayabusa, is the Dragon Ninja, the warrior who carries the blood of the Dragon Gods in their veins.

The Dragon Ninjas, also known in plural (龍の忍者/龍の忍び Ryuu no Ninja/Ryuu no Shinobi, Dragon Ninja) is the name given to a bloodline of legendary warriors who are destined to inherit the Dragon Sword and protect Earth from malevolent supernatural forces. Ryu Hayabusa, great leader of the Hayabusa Ninja Clan, was called by the title "Dragon Ninja" given the fact it was because of his centuries-old heritage which proceeds his reputation as the world's greatest ninja.

In the ancient era of myths and legends, the Evil Deities had returned in the wake of the Dark Dragon's chaos and mixed their essences with the bloodlines of the entire human race, enslaving mankind and creating a new race of Fiends. Most of the ancient humans were awed by the Evil Deities and revered them as gods, but one tribe rose up against their Fiendish masters and sided with the Divine Dragons (also known as the Dragon Gods), against the Dark Dragon and the Evil Deities. Descendents of this rebellious tribe would later be known as the Dragon Lineage.

Though the Dragon Lineage had managed to slay the Dark Dragon, the rest of the humans race were still slaves to their Fiendish overlords. Without an enemy to face, the tribes of Fiends had been fighting amongst themselves in a bid for domination, causing great suffering upon the human race caught in the chaos, as the destructive battles turned the earth into a hell. The Fiend Tribes were ultimately united when the most powerful of the Evil Deities known as the Archfiend, forced them all into his horde of minions.[8] The Dragon Lineage battled this horde of Evil Deities, their Fiends and the human tribes under their rule. This conflict extended for tens of thousands of generations.

Greatly outnumbered, the remaining Dragon Lineage warriors began employing guerrilla tactics, striking from the shadows. Eventually the Dragon Lineage survivors, those who were directly descended from the great warrior who slew the Dark Dragon, became the Dragon Ninja. Unlike their future ninja counterpart, the Dragon Ninja mostly fought armies head on and out in the open; employing the occasional stealth, sabotage and assassinations of rulers upon the fiends. Eventually the great conflict ended when the Dragon Ninja sealed away the Archfiends and their spawn to eternal slumber in the underworld.

The humans now free from Fiendish rule began determining their own destinies, as generations of Dragon Ninja safeguarded the world from the shadows, forever vigilant. Possessing supernatural strength, speed, and agility, the Dragon Ninja were feared and revered throughout history.

The Dragon Ninja inhabited the Aokigahara forests of Mt. Fuji, near where their ancestors had sealed away the Archfiend to the underworld millenias ago. There they struck down the malevolent supernatural forces who occasionally haunted the forests. Overtime the Dragon Ninja settled there and aligned themselves with the Hayabusa Spirit, adopting it as their guardian animal they formed the Hayabusa Ninja Clan.

Time passed and in the late 16th century came the arrival of famed samurai lord Oda Nobunaga, who as powerful as he was feared the demonic creatures that dwelled in the Aokigahara forests. Lord Nobunaga, who had earlier decimated the Ninja of Iga province, now sought to ally himself with the Hayabusa Ninja Clan lead by the Dragon Ninja Shunden. After their meeting Nobunaga shook hands with Shunden and ordered the construction for the Castle of the Dragon. The Dragon Ninja now had a fortified base of operations, from which they could continue their struggle against malevolent supernatural beings where ever they may surface. 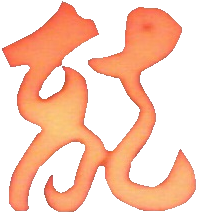 The symbolic crest of the Dragon Clan.
Add a photo to this gallery

Retrieved from "https://hero.fandom.com/wiki/Dragon_Clan?oldid=1713037"
Community content is available under CC-BY-SA unless otherwise noted.