Note: Dragonborn's personality and motives depend on the player's decisions; this article covers the good version of Dragonborn.

In common sense, a Dovahkiin (meaning "Dragonborn" in ancient dragon language) is a rare individual that was born with dragon blood but with the body of a mortal. They can naturally speak the ancient and powerful tongue of the dragons.

The Dovahkiin can be from any race (human, elf, or beast) and either gender, depending on the player's choice. However, in the trailer for Skyrim, Dragonborn is a male Nord warrior, wearing an iron helmet that bears a slight resemblance to the Nordic Helmet which Skyrim's culture is based on, a studded armor chest piece, iron gauntlets, and iron boots, carrying a steel sword and a banded iron shield.

In the year 4.E. 201, at the beginning of the game, the Dragonborn is captured by the Imperial forces whilst attempting to illegally cross the border into Skyrim from Cyrodiil. While being transported to the settlement of Helgen for public execution, the Dragonborn discovers that Ulfric Stormcloak, the leader of the Stormcloak rebellion, is a fellow prisoner.

However, the Dragonborn finds out that another member of the Blades named Esbern was hiding from the Thalmor in Riften's sewers. The Dragonborn is tasked to find him and get him out of there before the Thalmor find him first. The Dragonborn rescues Esbern and they set out to find Alduin's Wall, which tells them more about the prophecy of Alduin's return at the end of the world. They also learn that the Heroes of the Old used a shout to defeat Alduin temporarily.

The Dragonborn goes to the Greybeards to learn this shout, only to find out that they themselves do not know the shout because it's not originally draconic, but was created by mortals. The Dragonborn is told to meet the Greybeards' leader, the dragon Paarthurnax, who tells them how to learn the shout by using an Elder Scroll. The Dragonborn finds the Elder Scroll is a Dwemer ruin called Tower of Mzark, and uses it at the Throat of the World to witness how the Ancient Nord Heroes had defeated Alduin, and learns the shout from them.

After the vision ends, Alduin appears and a duel begins between them. With the help of Paarthurnax, the Dragonborn defeats Alduin, but Alduin manages to escape with his remaining power. After the battle, Paarthurnax tells the Dragonborn to capture one of Alduin's allies and interrogate him about Alduin's whereabouts.

In order to do that, the Dragonborn must secure the Dragonsreach in Whiterun first. And to do this, the Civil War must be completed, or a peace treaty must be signed between the Stormcloaks and the Imperial Legion.

After securing the Dragonsreach, the Dragonborn calls Odahviing, managing to lure him to the trap, and captures him. They interrogate him about Alduin's whereabouts and finds out that he has traveled to Sovngarde, the Nordic afterlife, to regain his strength. His portal is located in Skuldafn, the Nordic ruin located on the mountains between Skyrim and Morrowind.

The Dragonborn is approached by an Orc named Durak who tells them about the presence of an Order of Vampire hunters known as the Dawnguard and inquires them to join them. The Dragonborn goes to Fort Dawnguard located in a canyon to the south-east of Riften near the Morrowind border.

They speak with Isran, the leader of Dawnguard who tells them that there's a vampire activity happening in a cave known as Dimhollow Crypt and sends them to investigate. The Dragonborn finds out that the vampires are looking for an artifact. The Dragonborn kills the vampires and unlocks the tomb which contains a woman with an Elder Scroll at her back. The woman introduces herself as Serana and states that she has been sleeping for centuries.

She also says that she's an ancient pure-blooded vampire and the daughter of an immensely powerful Vampire Lord. The Dragonborn leads her out of the crypt and escorts her to her home which is in fact a gigantic castle known as Castle Volkihar located on an island to the far-west of Solitude near the border of High Rock.

When they enter the castle, they're greeted by Serana's father, Lord Harkon who thanks the Dragonborn for finding the Elder Scroll and rescuing his daughter. As a reward, he offers his own vampirism to the Dragonborn. The Dragonborn refuses Harkon's offer and is banished from the castle. They awaken at the coast near the castle and travels back to Fort Dawnguard where they encounter several vampires attacking the fort. After the Dragonborn defeats them, they inform Isran about what they found in the crypt.

He introduces himself as Dexion Evicus and they make it back to Fort Dawnguard. Dexion reads the Elder Scroll which tells about a divine weapon known as Auri-El's Bow, the bow used by Auri-El (or Akatosh) himself. He cannot read any further however as his vision blackens. Serana tells the Dragonborn that the third Elder Scroll is in possession of her mother, Valerica who's believed to be in hiding from Harkon. They travel back to Castle Volkihar but through the undercroft. As they make it to the backyard, they find a sundial located in the center of the garden. The Dragonborn solves the sundial puzzle and they enter Castle Volkihar Ruins.

After several challenges in that area, they finally make it to Valerica's Study where they find a strange device that looks like a portal. In order to open it, however, they will have to use several unique ingredients and Valerica's blood, at least someone who also carries her blood which would be Serana. After successfully opening the portal, the Dragonborn attempts to enter first but fails as entering the portal starts to drain his/her life. A late coming warning of Serana indicates that mortals are normally not permitted to enter that realm and asks the Dragonborn to be turned into a vampire.

The Dragonborn may either accept or refuse while refusal will cause Serana to partially soul trap them as an offering to the rulers of that realm. They enter the Soul Cairn, a plane of Oblivion ruled by entities known as Ideal Masters. After fighting against several undead creatures, they make it to the area where Valerica is imprisoned.

After completing his/her trial with the Greybeards, the Dragonborn is attacked by a group of cultists who claim the Dragonborn to be a false Dragonborn. The Dragonborn kills them and discovers that they are the cultists dedicated to someone named Miraak. The Dragonborn travels to the island of Solstheim to discover the reason behind the attack. They reach Raven Rock, a settlement built by the Dunmer who escaped from Morrowind after the eruption of the Red Mountain.

The Dragonborn is greeted by Adril Arano, the Second Councilor of Raven Rock who asks them why they are visiting Raven Rock. The Dragonborn tells him that they are looking for Miraak. Adril directs the Dragonborn to the Temple of Miraak located to the north of the island. There they meet a Nord named Frea who introduces herself a the shaman of the Skaal, a clan of Nords native to Solstheim.

They venture to the deepest part of Miraak's Temple and then Dragonborn discovers a Black Book. They read it and are then teleported into a different realm where they meet Miraak in person. Miraak taunts the Dragonborn and then they are sent back to his temple. The Dragonborn alongside Frea make it to the Skaal Village.

Depending on the player's choice of race and gameplay style, the Dragonborn can develop various skills and abilities. The main skill however is the use of Thu'um, which means "Shout" in dragon language. Although this skill is not exclusive to the Dragonborn, meaning that other people can use it as well (most notably the Greybeards and Ulfric Stormcloak), only a Dragonborn can use this skill without the required training, as they are born with it. In addition to that, there are also three classes (Warrior, Mage and Thief) and each of them have six skills. 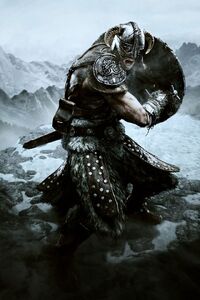 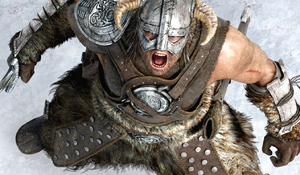 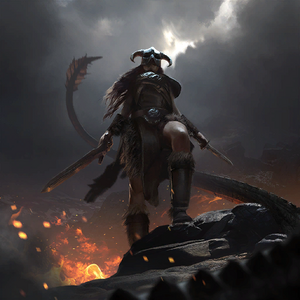 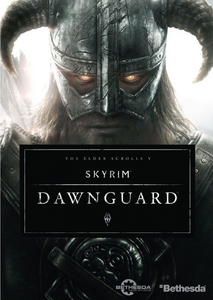 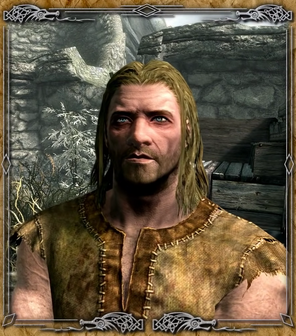 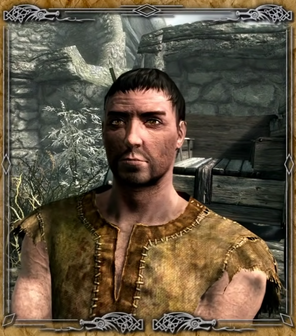 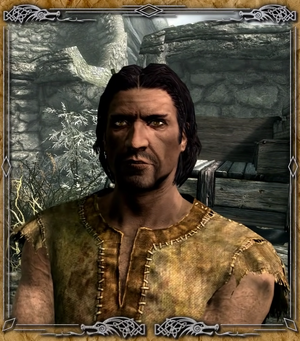 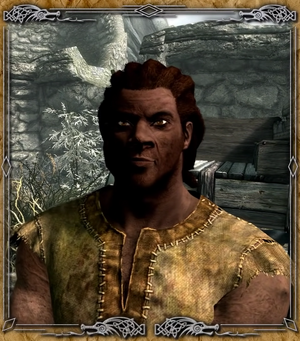 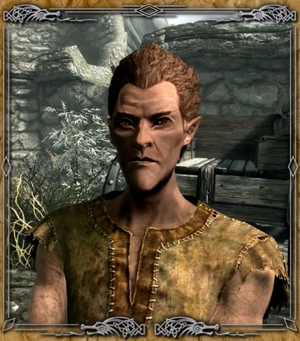 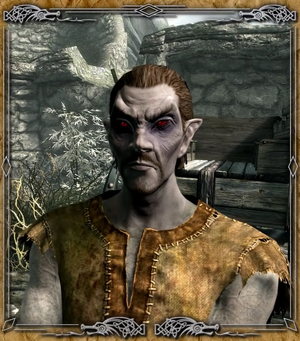 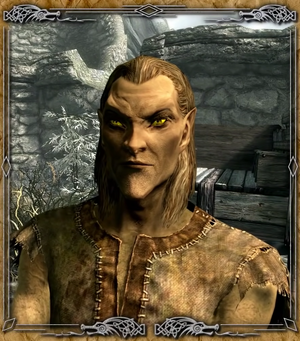 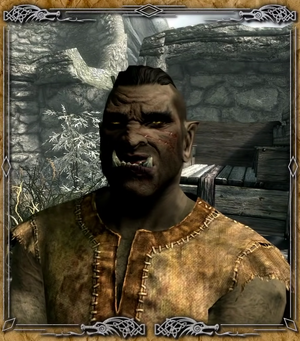 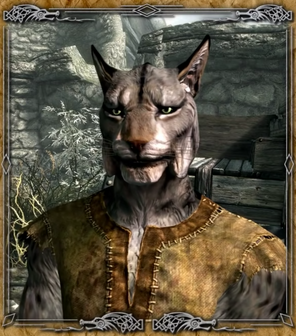 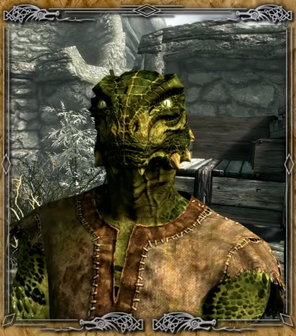 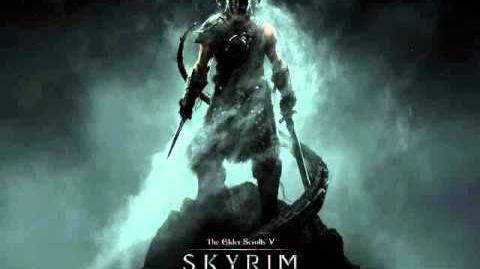 Song of the Dragonborn

Dragonborn, Dragonborn, by his honour is sworn,
To keep evil forever at bay!
And the fiercest foes rout when they hear triumph's shout,
Dragonborn, for your blessing we pray!

Hearken now, sons of snow, to an age, long ago,
And the tale, boldly told, of the one!
Who was kin to both wyrm, and the races of man,
With a power to rival the sun!

And the voice, he did wield, on that glorious field,
When great Tamriel shuddered with war!
Mighty Thu'um, like a blade, cut through enemies all,
As the Dragonborn issued his roar!

And the Scrolls have foretold, of black wings in the cold,
That when brothers wage war come unfurled!
Alduin, Bane of Kings, ancient shadow unbound,
With a hunger to swallow the world!

But a day, shall arise, when the dark dragon's lies,
Will be silenced forever and then!
Fair Skyrim will be free from foul Alduin's maw!
Dragonborn be the saviour of men!

Dragonborn, Dragonborn, by his honour is sworn,
To keep evil forever at bay!
And the fiercest foes rout when they hear triumph's shout,
Dragonborn, for your blessing we pray!