Various but primarily originated from Earth

On & Off
Heroes with Evil Counterparts
Heroes of Folklore
Dragons are a legendary species of folklore and fairytales across virtually all of the world. They are a species of fictional, often times flying, fire-breathing reptile, though their appearance and powers can vary depending on their culture respectfully.

Although many are typically depicted as villains, some incarnations (such as those in Eastern Cultures) are depicted as being more heroic.

It is unknown when the first work depicting a dragon originates, however what is known is that the word dragon first appeared in the English language in the early 13th century from Old French dragon, which in turn derives from the Latin word draconem (nominative draco) meaning "huge serpent, dragon", and the Greek word δράκων, drakon (genitive drakontos, δράκοντος) meaning "serpent, giant seafish". However, the Greek and Latin terms were used to describe any large reptilian beast, whether realer fictional, and it was until the 18th century when the English word began to use the word more exclusively to the fictional beasts.

Dragons' appearances and powers vary upon culture to culture, but generally, they are depicted as large, flying and fire-breathing reptiles. Because of their great size and power, dragons were often depicted as the antagonists of their respective tales in which they battle against a heroic protagonist and [usually] lose.

One tale in particular, St. George and the Dragon, depicts the namesake saint battling a fearsome dragon to rescue a princess in distress. George slays the dragon, and earns the holy title as a result of his heroism. This tale has since become the basis for how tales depicting dragons have since evolve in other forms of folklore and popular culture.

While Western Cultures typically depicted dragons as antagonists, Eastern Cultures presented them in a more positive point-of-view. In Asia, dragons are often represented as being part of the forces of nature, and are able to control one or more of the Earth's elements. Dragons are also considered a symbol of strength, wisdom, and good fortune. Many forms of good spirits in Eastern culture take the form of a dragon to help protect the individuals they care about against the forces of evil.

Since the 20th century, many heroic dragons have appeared in various forms of media:

Spyro is the titular protagonist of the game series of the same name. He is a small, but headstrong purple dragon who goes on multiple quests to save the Dragon Realms, Avalor, and the Forgotten Realms from various villains, most notably Gnasty Gnorc, Ripto, and Red. He also appears as one of the main characters in the Skylanders game series. Throughout all the games, Spyro is virtually resourceful with a number of different breath weapons and abilities that enable him to overcome various obstacles.

Dragon Tales depicts a number of friendly dragons who leave in a realm called Dragonland that is parallel to reality. Two human children named Emmy and Max meet and befriend several notable dragons, including the ever-so-hungry Ord, the shy but intelligent Cassie, the two-headed duo Zak and Wheezie, and the elderly mentor Quetzal. The group travels to various parts of Dragonland, where they often encounter various everyday situations pertaining to one or more of the characters.

In The Elder Scrolls V: Skyrim, dragons are considered the sons of the god of time Akatosh. While many of the dragons are evil, some such as the leader of the Greybeards named Paarthurnax and the turncoat Odahviing side with the Dragonborn to stop the black dragon named Alduin from potentially destroying reality.

Dragons appear in the mobile game Clash of Clans, in the game there are three types of dragons that can be used: the standard dragon, which does high damage and has high health but costs lots of elixir and moves slowly; the baby dragon which has less health and does less damage, but costs less elixir and has a special rage ability; and finally the electro dragon, which does even higher amounts of damage and has even more health than its normal counterpart, and does even more damage upon its death, but takes a long time and lots of elixir to train one unit. 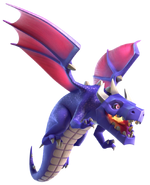 A Dragon in Clash of Clans. 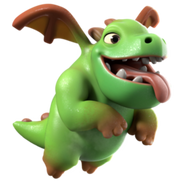 A Baby Dragon in Clash of Clans. 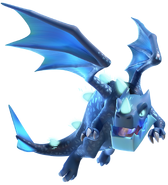 An Electro Dragon in Clash of Clans.
Add a photo to this gallery

Retrieved from "https://hero.fandom.com/wiki/Dragons_(Folklore)?oldid=1640207"
Community content is available under CC-BY-SA unless otherwise noted.