Drake is a dragon who appeared as the main protagonist in Dragonheart: A New Beginning, the sequel of Dragonheart. He is the son of Draco and he is the last of his kind and his rival is Griffin, he icebreathing Griffin to death and uses his half of heart to revive Geoff.

He is voiced by Robby Benson, who also voiced Beast.

One year before his death, Sir Bowen visits the cave-home of his long-dead friend Draco, and there he discovered a dragon egg. He took the egg to a monastery where lived his friend Brother Gilbert, a monk. The friars at the monastery pledged to hide the dragon away, with Friar Peter protecting him and teaching him for 20 years. The task of taking care of the dragon is passed to a young and gullible friar named Mansel.

An orphaned stable boy named Geoff, who dreams of one day becoming a knight like Bowen, lives at the monastery, doing menial chores; he tricks Mansel into manual labor and discovers the hidden Drake, the dragon. At first Geoff is afraid, but realizes Drake is more afraid of him. They soon form a friendship.

Meanwhile, two Chinese citizens, appearing to be a frail old man and his son, enter the kingdom and ask Friar Peter if he knows anything about dragons, as there is a prophecy stating that "a dragon's heart will doom mankind when a two-tailed comet blazes across the night sky". The comet will come in a matter of days, so they want to make sure that there are either no dragons around, or, if there is one, confirm that its heart is pure and that it will not be tempted into fulfilling the prophecy. Meanwhile, the King makes a mysterious man named Osric his adviser, and Osric pledges to unite the kingdom under the old code, but corrupts it by forcing each status of citizen to wear a certain color of tunic.

While Geoff is complaining about this new law, he and Drake are surprised by some bullies, and Drake is forced to take his first flight. During this, the two Chinese learn of Drake's existence and start to train him to use his dragon abilities, including fire-breathing, flight, using his tail, claws, and teeth, and to exhale an ice breath, the last of which is a rare skill that few dragons managed to master. Before this time of teaching, Geoff discovers that the Chinese grandson is the princess of China in disguise, who reveals that dragons once abetted mankind until an evil dragon named Griffin betrayed the dragons and killed humans. Fearing that all dragons were akin to Griffin, the Chinese emperor ordered the killing of every dragon in the country, so that Drake is the last dragon in the world.

The Chinese citizens are captured and Geoff is made a knight for his friendship with Drake. Osric takes them to battle a group of rebels where a fight engages, during which Osric fakes a fatal blow and asks Drake to give him half his heart. Realizing that the attempt is a trick, Geoff rallies Drake in an escape. Drake masters his fire-breathing skills for the first time, previous efforts having resulted in the fire coming out of his back. At the castle, Osric recognizes a familiar box. Master Kwan, the elder Chinese, recognizes Osric's true identity and orders the amulet burned. Osric recovers the box and discovers his lost heart. Out of revenge for her ancestor's slaying of the dragons, Osric throws a knife at Master Kwan's companion Lian, but Kwan intervenes and dies.

Geoff and Drake arrive, and as the comet comes into view, Osric reveals himself as Griffin, whose heart was cut out by the emperor, and which Lian carried with her to protect it. When he recovers possession of his heart, he resumes his dragon form and asks Drake to join him in the conquest of mankind. Recalling how Griffin would have cost him his soul if Geoff had not intervened, Drake refuses and challenges Griffin. He uses his ice breath to freeze Griffin to death. Geoff is injured by a piece of ice lodged in his heart; so Drake offers a piece of his own, securing his place in the constellation Draco. The old code was restored and Lian returned to her royal duties for a time. Mansel is awarded guardianship of Brother Gilbert's scrolls and has a life of prayer and devotion. Geoff and Drake go on to become brothers, having discovered the familial bond that is all they ever truly wanted. 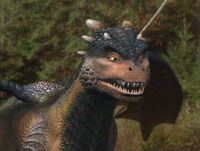 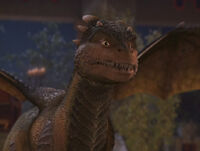 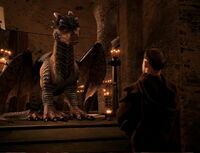 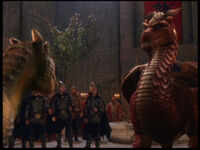 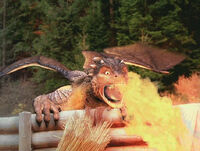 Drake killed Griffin
Add a photo to this gallery
Retrieved from "https://hero.fandom.com/wiki/Drake_(Dragonheart)?oldid=1575737"
Community content is available under CC-BY-SA unless otherwise noted.