Help Ty and his gang defeat D-Structs and D-Stroy (succeeded).

Gentle Giants
The Dreadtrux are supporting protagonists in Dinotrux. Only two members are known: the Mother Dreadtrux and Lil' Dread.

One Dreadtrux was hibernating and Ty Rux and the gang found her. They attempted to relocate her and the plan worked, until she awakened from her sleep. She chases the gang (plus D-Structs and Skrap-It) into the Crater. While this happens, she indirectly buries D-Structs under rubble. With that, he agrees to help Ty drive the Dreadtrux out of the Crater, but only because Ty revealed his own home would be destroyed as well as D-Structs's home. They succeed in tripping the Dreadtrux, but she gets back up. Revvit reveals to Ty that she is looking for her egg. The egg is given to the Dreadtrux, and she leaves the Crater.

The same Mother Dreadtrux is found by D-Structs and D-Stroy (D-Structs's older brother), and they abuse her until she follows her orders. As she follows their orders, they give her ore, but only because they still intended to use her. After D-Structs and D-Stroy commit perfidy by leaving the Crater and pretending to surrender, they later appear with the Mother Dreadtrux, which starts eating Ty's builds because D-Stroy secretly added helium ore to the builds earlier on. The threat of D-Stroy, D-Structs, and the Dreadtrux causes the gang to flee into a secret forest with Xee's help, and they build a renegade base.

The Mother Dreadtrux's very presence causes the other Dinotrux to fear D-Structs and D-Stroy, because she is under their control. She eventually tries to murder Ty, but he is rescued by Ton-Ton, who opens the doors to the Ankylodump Games so he can escape.

Ton-Ton eventually befriends a baby Dreadtrux by rescuing it from several hostile Scraptors, and names it Lil' Dread. They do some fun activities together for a while, but Ton-Ton eventually decides to take it to the renegade base, not realizing it would eat a lot of stuff in it. The rest of the gang tells Ton-Ton to take the baby Dreadtrux back to where it belongs, out in the wild. Ton-Ton agrees to this, and attempts to do so, not knowing that Skrap-It is spying on both him and Lil' Dread. D-Structs and D-Stroy kidnap it from Ton-Ton and trap it in the Garage, which both D-Structs and D-Stroy owned for a time being before the end of the season. However, Ty and Ton-Ton rescue Lil' Dread from them, and Ton-Ton releases it back into the wild, much to Lil' Dread's grief.

Soon, the gang decides to lure the Mother Dreadtrux out of the Crater after realizing D-Structs and D-Stroy ran out of helium ore. Garby becomes part of their plan as well. The gang successfully trick D-Structs and D-Stroy into thinking they have the ore, but they both find out that the ore is fake, and Garby ate it all. He then releases the ore into the air, and the Mother Dreadtrux leaves the Crater as a result.

At the very last episode of Season 3, Ty and the gang realize the Dreadtrux that D-Stroy and D-Structs abused was the very same mother Dreadtrux they had encountered much earlier. He then befirends her—by feeding her helium ore, which is all she eats, only in a friendlier manner than D-Structs and D-Stroy. He then introduces her to the rest of his gang, and after hearing their plan to build a massive tunnel back to the Crater, the Mother Dreadtrux uses her body language to show she agrees to their plan. She drills and eats the rock to make way for the tunnel while the gang structure it so it can't fall down. After it is done, the gang thanks her for her help, and leaves. Soon, D-Structs turns on D-Stroy and lets him be driven back into the tunnel by the angry Dinotrux mob, which entrance is blocked. It's possible D-Stroy was killed by the Mother Dreadtrux for abusing her, thus giving him what he deserves. 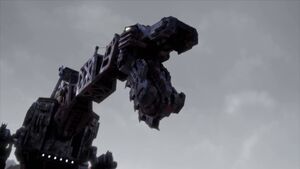 The mother Dreadtrux which Ty and the gang (and D-Structs) first encountered, and then was abused by the D-Brothers. 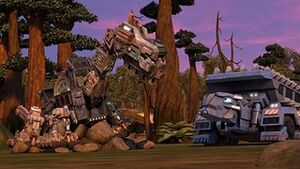 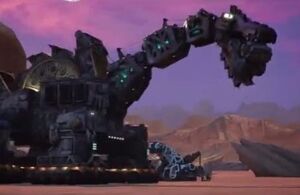