Sibling Rival
Andrew Louis "Drew" Pickles is the father of Angelica Pickles. Married to Charlotte Pickles. He is also the older brother of Stu Pickles and the first son of Lou and Trixie Pickles and the brother-in law of Didi Pickles and the uncle of Tommy and Dil Pickles.

He works as an accountant, but unlike his workaholic wife, he still manages to get in time with his daughter, to whom he usually refers as "princess", "angel", "cupcake", "muffin", "pumpkin (pie)", etc.

Though he is sometimes driven up the wall by Angelica's greedy, bratty behavior, he still loves her just the same, and sometimes is hesitant to punish her if she does something wrong. When he does punish her, however, he usually is screaming at her but doesn't hit or spank her and sends her to her room sometimes.

He is also the oldest son to Lou and Trixie Pickles, and often shares a sibling rivalry with his younger brother Stu. The brothers can often be seen fighting with each other, most notably in The Rugrats Movie, when Drew was bickering on how unrealistic Stu's toy-building career is and not being responsible, when Drew learn that his brother lost Angelica when Stu was actually responsible to watch the kids, Drew furiously attacks Stu for being neglectful. Almost any time a celebration or get-together is going on involving Stu Pickles and his family, Drew Pickles is usually involved, often bringing over Angelica with him. His year of birth is probably somewhere between 1957 and 1958. He is voiced by Michael Bell (who also voiced Chaz and Boris) as an adult and Pamela Adlon as a baby. 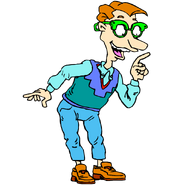 Drew seething with fury after hearing that his brother lost Angelica

Drew in All Grown Up!

Retrieved from "https://hero.fandom.com/wiki/Drew_Pickles?oldid=1954678"
Community content is available under CC-BY-SA unless otherwise noted.