Lawful Good Alien
Driba is a character in Ben 10: Omniverse. He and Blukic are the Plumber tech support for the Plumber base on Earth.

Driba is fatter and larger than an average Galvan and wears a Plumber Suit.

Driba and Blukic share a superiority complex in regards to Galvan intelligence, which causes them to often disregard the input of others. He is somewhat more level-headed than Blukic, though that isn't enough to keep them out of trouble.

Like his partner, Driba is quite fond of Mr. Smoothy.

Like all Galvans, Driba is small enough to enter machinery and tight places that larger beings cannot.

By Galvan standards, Driba is not considered very intelligent, but he is still able to understand scientific theories and complex machinery far better than any human scientist or engineer.

Driba can improvise repairs and devices during dire situations including complex devices such as the Anihilaarg and the Omnitrix.

Both Blukic and Driba were once part of the Level 1 Science Team, which causes Driba to shudder in fear of being demoted back down to.

In Evil's Encore, it is shown that Blukic and Driba had been part of the tech support for the Plumber base at Mt. Rushmore. One of their first blunders was when they received an order to create an escape tunnel, and they built a tunnel only big enough for Galvans and other smaller species.

Surprisingly, it is further revealed that Blukic and Driba have a longer history with the Earth in Blukic and Driba Go to Area 51. Apparently in the 1940s, they had accidentally launched Luhley's spacecraft, which was intended for a secret mission to Earth to stop Benevelon. However, the two ended up crashing on Earth and sparking the infamous Roswell UFO incident. With the help of a much younger and brash Max Tennyson, they were able to thwart Benevelon's plan at the time, but found that they were stranded on Earth. What happened in the decades before Evil's Encore has yet to be revealed.

Driba's name is based on the storyboard artist and director of some Ben 10 episodes, Dan Riba. 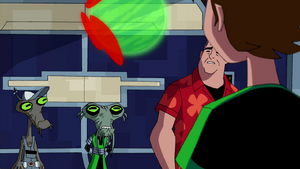 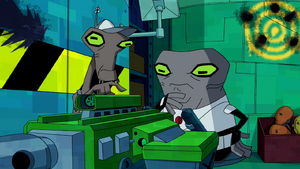 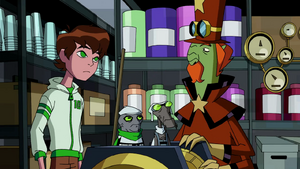