Drixenol is the deuteragonist of Osmosis Jones and its spin-off series Ozzy & Drix. He is a by-the-book cold pill who teams up with Osmosis Jones. David Hyde Pierce did his voice in the movie, and Jeff Bennett did his voice in its spin-off TV show. As Mayor Phlemming convinced Frank, the latter took Drix as a cold pill. He later joined forces with Ozzy to stop Thrax from killing Frank.

Drix is a red and yellow, boxy, and robotic cold pill who becomes Ozzy's best friend. Drix's right arm is a cannon used to shoot an assorted variety of medication, including one that freezes any target.

He is a follower of written rules and compensates for his doubts of himself by acting haughtily. He is intelligent, clever, and dedicated to work. Straight-laced and by-the-book, he is in disagreement with the crude humor and unorthodox methods of Ozzy, but respects Ozzy as a partner due to his dedication to fighting diseases.

Drix is first seen arriving at Frank, at request of the Mayor. After gathering information from Chill, he and Ozzy go up to the Zit to confront Thrax and his men.

There, almost everyone is killed due to one of his medicine grenades being thrown by Osmosis Jones. Both he and Ozzy are fired by the mayor for excessive force, and in an attempt to cover the seriousness of Thrax's infection.

Just before Drix leaves Frank by way of the Bladder, he teams back up with Ozzy and hunts down Thrax. He and Ozzy chase Thrax from the Hypothalamus to the mouth, where they confront him in the Uvula.

Frank is taken to the hospital under the influence of Thrax's attack. Ozzy and Drix rescue Leah and confront Thrax who leaves Frank's mouth after causing Frank to sneeze using pollen bombs.

Ozzy is launched out after him by Drix, where Ozzy and Thrax fight on one of Shane's eyeballs and end up on Shane's false eyelashe after she blinks which she was wearing atop her natural ones. During the fight, Thrax threatens to break his own record by killing Shane, but Ozzy tricks him into getting stuck on Shane's false eyelash and fall into a vessel of alcohol below where he dissolves.

During this time, the situation becomes even more dangerous when the temperature hits 108 degrees, causing Frank to go into cardiac arrest.

Just as all is lost, Ozzy arrives back at the Uvula in one of Shane's tears with the missing DNA chain. As Ozzy is reinstated into Immunity, he plans on extending Drix's time in Frank.

"Drixenol! The brand that eases your coughs and sneezes!" 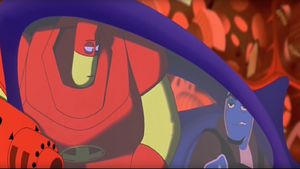 Drix with his cure cannon 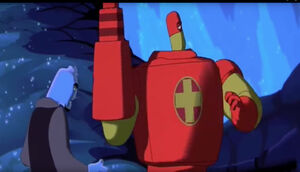 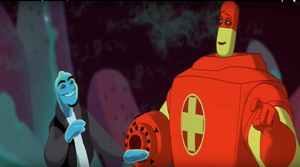 "Jones, you really know a sugar pill who killed Cancer? 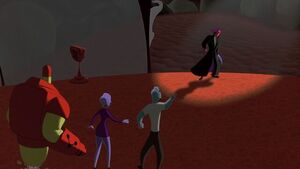 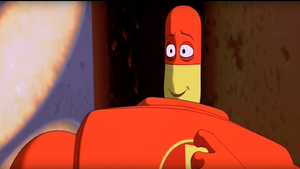 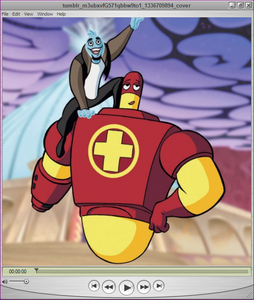 Retrieved from "https://hero.fandom.com/wiki/Drix?oldid=1704572"
Community content is available under CC-BY-SA unless otherwise noted.