Hero of the North
Leader of the Companions of the Hall

Drizzt Do'Urden  is a fictional character in the Forgotten Realms campaign setting for the Dungeons & Dragons fantasy role-playing game. Drizzt was created by author R. A. Salvatore as a supporting character in the Icewind Dale Trilogy. Salvatore created him on a whim when his publisher needed to replace another character in Salvatore's first novel, The Crystal Shard.

Drizzt has since become a popular heroic character of the Forgotten Realms setting, and has been featured as the main character of a long series of books, starting chronologically with The Dark Elf Trilogy. As an atypical drow (dark elf), Drizzt has forsaken both the evil ways of his people and their home in the Underdark, in the drow city of Menzoberranzan.

Drizzt's story is told in Salvatore's fantasy novels in The Icewind Dale Trilogy, The Dark Elf Trilogy, the Legacy of the Drow series, the Paths of Darkness series, The Hunter's Blades Trilogy, the Transitions series, and the Neverwinter Saga, as well as in the short stories "The Dowry," "Dark Mirror", and "Comrades at Odds".

All of the novels featuring Drizzt have made the New York Times Best Seller list. A number of the novels have been adapted into graphic novels by Devil's Due Publishing. Drizzt has also been featured in D&D-based role-playing video games, including the Baldur's Gate Series and Forgotten Realms: Demon Stone. 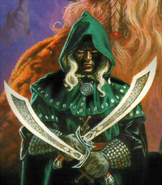 Drizzt Do'Urden as he appears in D&D 2nd Edition

Retrieved from "https://hero.fandom.com/wiki/Drizzt_Do%27Urden?oldid=1653627"
Community content is available under CC-BY-SA unless otherwise noted.