Drobot is a robot dragon in Skylanders: Spyro's Adventure.

Dragons are smart, but none so much as Drobot. He was born in the highest reaches of Skylands, where dragons spent all their time competing in aerial battles. But Drobot was more interested in taking things apart to see how they worked. While exploring one day, Drobot came upon some mysterious technology, and used his intelligence to assemble a robotic suit that would make him just as powerful as his fellow dragons... if not more so. His suit features laser beams that shoot from his eyes, flight enhancement technology, a vocal synthesizer that gives him a deep booming voice, and the ability to shoot spinning gears at a high velocity. With such power, more than most other dragons, Drobot joined the Skylanders to help protect the residents of Skylands. 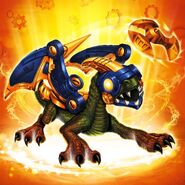 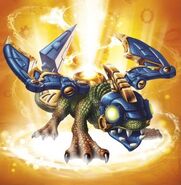