The Winged Shadow
The Queen's Monster
The Black Beast

Flying throughout the lands.
hunting.

Please and protect his mother (Successful; eventually failed in the TV Series).

Burn anyone his mother orders him to (succeeded).
To be free to fly anywhere and do what he wants (succeeded).

Those who are loyal to Daenerys

Drogon is one of three dragons introduced in the novel A Game of Thrones and subsequent novels as well as the Game of Thrones television adaptation of the novels. Drogon was named after Daenerys Targaryen's late husband Khal Drogo. Drogon hatched from one of three eggs that had been presented to Daenerys at her wedding to Drogo during her husband's funeral. He along with his brothers Viserion and Rhaegal imprinted on Daenerys as their mother. Drogon had black and red colored scales and red black wings. When first hatched Drogon was about the size of a house cat. Over the next several years he grew to become the size of a whale. Drogon was the largest and most aggressive of the three, and the most protective of Daenerys.

Along with his brothers Drogon was capable of breathing fire, and Daenerys trained him and his brothers to breathe fire whenever she said Dracarys (High Valyrian for Dragonfire). Men like Pyat Pree, Kraznys mo Nakloz, and the Masters fleet all were on the receiving end of fire from Drogon and his brothers, with fatal results. 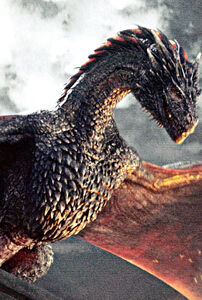 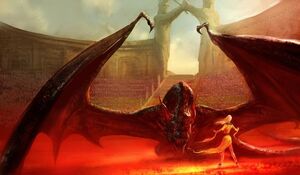 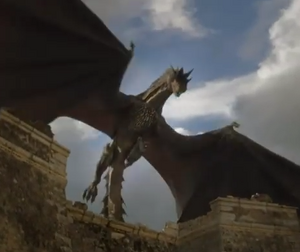