Dromarch is one of the characters in Xenoblade Chronicles 2. He is a Special Legendary Blade. He has the power to heal allies while attacking when bonded to his Driver named Nia. Dromarch uses the water element, wields a Twin Rings, and acts as a Healer in battle. He takes on the appearance of a tiger. He refers to Nia as "My Lady", as if he were a butler. With Nia in the lead riding Dromarch, the player can control him to move around the field faster.

He is voiced by Tōru Inada in the Japanese version and William Roberts in the English version.

Both Dromarch and Nia were the Blades of the wealthy lord of Echell in Gormott Province. After the lord's daughter's death, Nia is forced to consume her flesh and becomes a Flesh Eater. Once the lord himself passes away, Nia finds Dromarch's Core Crystal and re-awakens him. The two begin traveling Alrest and are eventually captured by the Indoline Praetorium for Nia's Flesh Eater status. Jin frees the two, causing them to join Torna.

After Nia witnesses Jin kill Rex in cold blood, she and Dromarch disassociate with Torna and escape on Azurda alongside Rex and Pyra. They land in Gormott, and Nia and Dromarch plan to part ways with Rex and Pyra once they reach Torigoth. Both Nia and Dromarch are captured by the Ardainian military in Gormott with the help of Brighid, though Rex and Tora help break them out of custody. After fleeing Torigoth, Rex convinces Nia and Dromarch to continue traveling with him.

These stats correspond to Dromarch wielding the Primitive Rings with no Aux Cores or Affinity Chart rewards. Different Core Chips result in different adjustments to each stat.

His Japanese name Byakko, known as "Bai Hu" (白虎) in Chinese, is the White Tiger in the Chinese constellations. It is one of the four symbols and represents the west and the autumn season. His English name may refer to Dormarch, a similar white beast from Welsh mythology that represents hunters, although it is more typically portrayed as a hound. 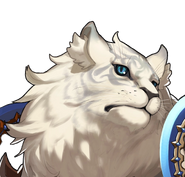 Nia with Dromarch alongside with Tora and Poppi. 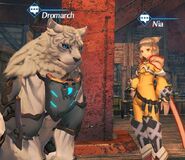 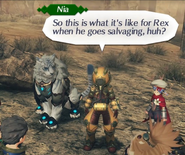 Retrieved from "https://hero.fandom.com/wiki/Dromarch?oldid=2009777"
Community content is available under CC-BY-SA unless otherwise noted.