Play with his father and the ogre triplets (succeeded).

The Dronkeys are a hybrid of both dragons and donkeys, namely Dragon and Donkey. There are six Dronkeys at the end of the movie, Dragon arrives, greeting Donkey and behind her came six Dronkeys. Donkey refers them as his "little mutant babies".

They first appeared during the after-credits scene.

The Dronkeys were placed in a zoo to be ridiculed for being freaks. They were eventually saved by Donkey and Puss. They are confused when they see that their father has switched places with Puss. At the end, they are shown to be good friends with the ogre triplets.

They make brief appearances in the fourth film. They are mostly seen having play dates with the ogre triplets. They are also present at the triplets' birthday party. Like the triplets, they don't exist in the alternate universe because their parents never met.

The dronkeys are full of character, with a destructive combination of childish energy and the flying and fire breathing abilities of a dragon, there is never a dull moment with the dronkeys! Unlike Shrek who was a bit overwhelmed with his triplets at first, Donkey was better prepared at being a parent, as his exuberance and talkative character meant he could keep them amused, and he was more willing to go along with their games. The only downside is Donkey didn't have much control over his dronkeys, allowing his brood to spread havoc and irritate people, while shrek was just as loving but a bit more assertive, meaning his own triplets where, in contrast to the dronkeys, more considerate and polite. The dronkeys, despite their manic and destructive natures, where still very affectionate and kind, showering donkey and dragon with kisses and being very outgoing, if a little boisterous. 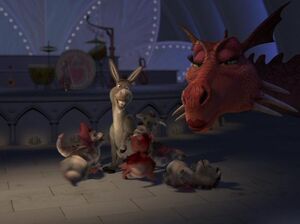