Heroes Wiki
Register
Don't have an account?
Sign In
Advertisement
in: Outdated Articles, Self-Aware, Partners in Training,
and 18 more

Duck Hunt is a duo made of the laughing hound and the duck from the Nintendo game of the same name.

The dog will do his best to catch the shot ducks for the hunter, but if it doesn't happen the dog will laugh at the hunter.

Duck appears in Super Smash Bros. Brawl as a sticker that give a boost on launch resistance on Ice Climbers, Mr. Game & Watch, Pit, and R.O.B. by 20.

The Duck Hunt duo returns in Super Smash Bros. Ultimate as unlockable characters. In their classic mode named "Dog, Duck, Zapper", the duo fights against characters who are animals. Both also were represented by a fighter spirit that can be obtained by clearing the classic mode with them.

In World of Light, Duck Hunt are one of the many fighters that are vaporised by Galeem's beams. Duck Hunt's puppet can be found on the light realm

Duck Hunt appears in the WarioWare series as minigame. 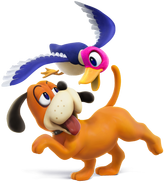 Dog's infamously laughing at the player for missing the ducks