Duck is a cheerful, busy, clever, reliable, loyal and wise engine that "does his work without fuss", and stands up to any bigger engine who tries to order him about. He runs his own Branch Line, called The Little Western, and is good friends with another Great Western engine called Oliver.

Duck is based off a Great Western 0-6-0 57xx pannier tank engine, one of the most numerous preserved class of steam locomotive in the UK.

Duck in The Railway Series 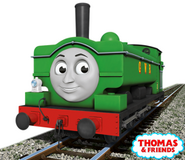 Duck in the CGI series

Duck, Donald, Douglas, Stanley, Samson and the workers are surprised to see Thomas charging towards the danger zone
Add a photo to this gallery

Retrieved from "https://hero.fandom.com/wiki/Duck_the_Great_Western_Engine?oldid=1631100"
Community content is available under CC-BY-SA unless otherwise noted.