To help Woody and his friends to save Forky (succeeded)

Ducky is a supporting character in the 2019 Disney/Pixar film, Toy Story 4.

He is voiced by Keegan-Michael Key who also voices Murray from Hotel Transylvania 2 & 3, Dave from The Star, Judge Peckinpah in the Angry Birds series and Alpha Wolf from Storks.

Ducky is a small, fluffy yellow stuffed toy duck and a carnival prize. He has orange feet, small yellow wings, and magenta eyes with large eyelashes. A tuft of "fur" rises from the crown of his head. He is overcome by jealousy, tries to be friends with Bunny, and also wants to be won. Ducky's left hand is permanently not even attached to Bunny's right hand.

Buzz searches for Woody on his own, seeking guidance in the button-induced phrases from his own voice box. Buzz finds himself as a prize in a carnival booth and escapes with plush toys Ducky and Bunny. Buzz finds Woody and Bo, and they recruit Ducky and Bunny to help rescue Forky, promising that they will become Bonnie's toys, along with Bo's old friend from the antique store, Duke Caboom, a Canadian stuntman toy.

At the antique store, the toys' plan to rescue Forky fails. Woody, the only toy still determined to save Forky, has a falling out with the other toys, and indirectly insults Bo. As Bo, Duke, Giggle, Ducky, and Bunny return to the carnival.

After which, the group changes their minds and returns to help Woody so that he finds Bonnie, accompanied by Gabby Gabby. The latter finally decides to be with a lost little girl who has found her parents and Woody stays with Bo, Giggle, Duke, Ducky and Bunny so that the fairground toys get an owner. 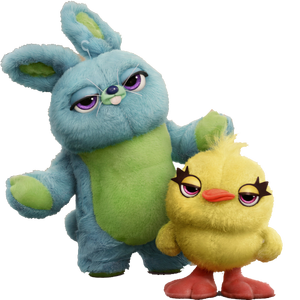 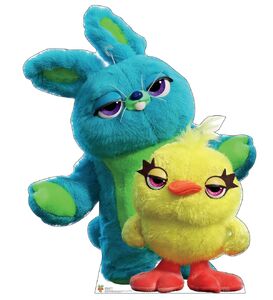 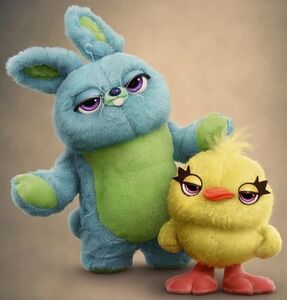 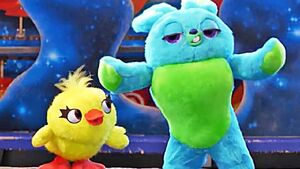 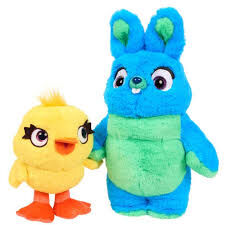 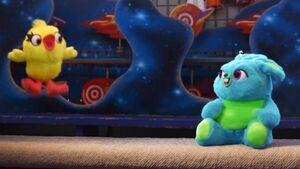 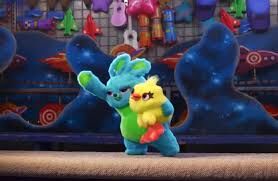