To get the bird for his master (formerly)

To help Kevin go back to her babies (succeeded)

He is voiced by Pixar story artist Bob Peterson.

Dug is a playful, friendly, and lovable dog who is always kind to those he loves. He likes almost everybody he comes across. He is also very good at following rules and can be somewhat of an airhead at times.

Dug is the top dog in Disney/Pixar's Up! He has just met you, and he loves you. Squirrel! 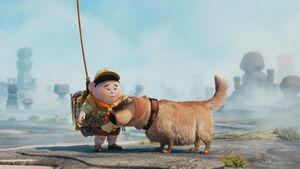 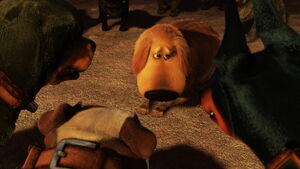 Dug whimpers about losing the bird before Alpha, Beta and Gamma put Dug in the Cone of Shame.