Sausages
Playing
Bullying Max while Katie is away (Former)

Get rid of Max and have Katie all to himself (Former; succeeded, but later failed/abandoned)
Escape the Flushed Pets and certain death

He is voiced by Eric Stonestreet.

Duke is a large, fat, and bulky brown mutt with shaggy fur. He has brown eyes, a large black nose, and a very large mouth.

Duke is very slobbery and ignorantly happy. He accidently causes trouble and is very energetic and playful. However, when angry, Duke can become very menacing and even villainous. This is demonstrated when he bullies Max while Katie is at work by eating his food and sleeping his bed, forcing Max to sleep on the floor while being blown by Duke's loud snoring.

When Duke was a young puppy, he had a owner, named Fred, but he ran off chasing a butterfly and he could not find his way back, which has resulted in the Animal Control putting him in custody. One day, Katie adopted him from the pound. Though Katie introduces Duke to Max as his new brother, Max does not want to live a new dog; Duke licks Max even if Max snarls at him, which makes Max disgusted.

Max becomes more upset about how Duke behaves. Duke accidentally breaks a ball Buddy found, which Katie thought it's their missing ball. When they are about to sleep, Duke sleeps where Max is supposed to sleep and snores. The next morning, Chloe advises him that he needs to do more or else his life would be ruined. On the other hand, Duke eats Max's dog food; so Max begins to threaten Duke by breaking things in the apartment and later treats Duke as a servant when he, Buddy, Mel and some other dogs are taken to the dog park.

This drives Duke to deceive Max into downtown New York, while other dogs are distracted by a butterfly. He runs into a street where Ozone, the leader of a cat gang called The Alley Cats, are at. At first, he tries to abandon Max there but they both are defeated by Ozone and numerous cats. Their collars are stolen, which causes them to get captured by two Animal Control officers.

Nevertheless, Snowball, the leader of The Flushed Pets, appears and saves Ripper, who is also caught by the Animal Control, and Max and Duke persuades Snowball to unlock their cage by claiming they are not domestic dogs. Snowball is convinced and takes them to his underground lair. There, Snowball wants the two dog to tell the story about "how they killed their masters" so Duke and Max makes up one, then Snowball orders a giant bushmaster called Viper and wants him to bite Max and then Duke as a sign of being a new member. But later the identity of Duke's and Max's are exposed by another cats, so all animals of The Flushed Pets begin to attack Max and Duke.

Duke bites Viper by tail and swipe the approaching animals and throws it to a pipe. Viper attempts to attack Max, but he is too long and is tied to the pipe, and his big move to escape causes loads of bricks and concrete crashes on him, so he dies instantly. So, Duke and Max run away from Snowball's chase and escape the sewer; they get into a river and go on to a boat. Yet, the boat is going to Brooklyn, the opposite site of their home. When they reach the bank, they want to find something to eat but unsuccessful. They sit in front of a man who is eating a sandwich, they try to do the "puppy eyes" but the man runs away in horror. Duke then notices something and sniffs; he runs with Max and they found a sausage factory so they gorge on sausages.

Duke later tells Max that he had another owner called Fred, but Duke can't find the way home after he finally eats a butterfly he chased, so he was sent to the pound. Max encourages Duke to find Fred, and when they are about to do so, the two Animal Control officers enters and want to catch them again but they are crashed by several boxes of sausage after Duke kicks on it. Duke finds the house Fred lives, but a cat called Reginald is there and tells him and Max that Fred was dead and the house now belongs to a new family. Duke thinks he's lying and barks at the family who are just come back. The Animal Control officers suddenly appears with a new truck and catches Duke, so Max chases after it.

On the other hand, Snowball and other animals arrives to Brooklyn; he disguises as a baby and Tattoo as a woman, and they find Max, but other animals are caught except Snowball and Max. So Snowball and Max drives a bus and stops the Animal Control's truck, but the truck is almost falling to the river and hangs on Brooklyn Bridge. Max finds the key to the cage but the truck falls into the river and the key is dropped in the process, so Snowball also jumps into the river, finds the floating key and gives it to Max. Later, Tattoo drives a taxi and brings all animals to Manhattan. At last, Duke and Max go back to their apartment in the night before Katie goes home. The dogs had finally settled their feud and are now good friends.

Duke and the other pets will appear in the upcoming sequel. 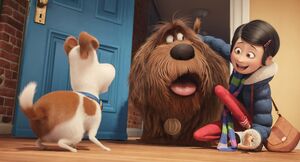 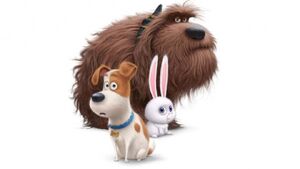 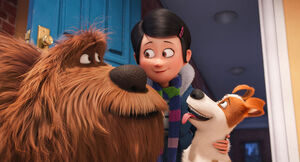 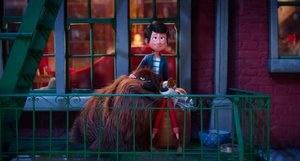 Retrieved from "https://hero.fandom.com/wiki/Duke_(The_Secret_Life_of_Pets)?oldid=2040186"
Community content is available under CC-BY-SA unless otherwise noted.