Help his friends. (both succeeded)

Supporter
Ryuji Otogi (also known as Duke Devlin in the 4Kids dub) is one of the two teteragonists of the Yu-Gi-Oh! franchise, alongside Ryou Bakura. He is the creator of the game Dungeon Dice Monsters. Otogi also owns the "Black Clown" game shop, which rivals Sugoroku Muto's Kame Game.

He is voiced by Marc Thompson who also voices Casey Jones, Astral, Ash's Tepig, Gliscor and Sandile in English version.

Otogi invented Dungeon Dice Monsters and visited Pegasus J. Crawford to demonstrate the game shortly before the Duelist Kingdom tournament. Otogi was impressed by Pegasus' skill at the game. Pegasus himself enjoyed the game and approved of the creation of Dungeon Dice Monsters, wanting to expand it further. Upon Pegasus' request, Otogi allowed him to make additions to the game, including adding the "Black Magician" as a monster, and hacking into KaibaCorp's computer system. When Pegasus disappeared after being defeated by Yugi Muto in the Duelist Kingdom tournament, Otogi blamed Yugi for his disappearance and believed that Yugi must have cheated to beat a gamer as good as Pegasus. He swore to get revenge on Yugi, whom he believed didn't deserve the title "King of Games."

After the Duelist Kingdom tournament, Otogi opened the Black Clown (a rival game shop to the Kame Game) and transferred to Domino High School, the school that Yugi and his friends attend. He quickly became popular and impressed girls with a number of dice tricks. Jealous, Jonouchi challenged Otogi to a game of Duel Monsters. They agreed to the stakes that if Jonouchi won, Otogi would close his shop, and if Otogi won, Jonouchi would be his slave for a week. Having been the runner-up in Duelist Kingdom, Jonouchi was certain that he would win. However, not having his own deck, Otogi insisted that they play using cards straight from booster packs. Joey agreed, and they each created a brand-new deck.

The duel took place at the Black Clown. Otogi televised the event in the hopes of humiliating Jonouchi. Over the first few turns, Joey knocked chunks out of Otogi's Life Points while leaving his own unscathed, but Otogi managed to turn the duel around and take out all of Jonouchi's Life Points in one turn.

In keeping his end of the bargain, Jonouchi became Otogi's slave. Otogi further embarrassed him by having him dress in a dog suit. Dark Yugi was disgusted by his treatment of Jonouchi and challenged Otogi to a duel to release Jonouchi. Otogi was not interested in dueling and challenged Yugi to a game of Dungeon Dice Monsters. If Yugi won, Jonouchi would be free again, but if Otogi won, Yugi was to swear on his grandfather's life to never play Duel Monsters again. Otogi also televised his game with Yugi. Having not played Dungeon Dice Monsters before, Yugi struggled at first and Otogi gained an early advantage. However, Yugi made a few comebacks and ultimately won using the "Black Magician" that Pegasus had added.

Otogi then apologized to Yugi, having realized that Yugi was an honest game player and determined that he would not have cheated against Pegasus. He began to worry that the televised game was going to be bad publicity as it made him look like a bad person. However, Yugi and his friends comforted Duke, assuring him that Dungeon Dice Monsters had the potential to become a great game. Soon after, Duke received word from Industrial Illusions in the form of an email stating that they would be helping produce Dungeon Dice Monsters, and had agreed to make the game global.

Otogi appeared again during Seto Kaiba's Battle City tournament, where he saved Shizuka Kawai and Hiroto Honda from Rare Hunters, meeting Mai Kujaku in the process. He watched the rest of the tournament along with the other characters. He is shown having a crush on Shizuka, much to Honda's disgust.

Otogi was trapped in Noah Kaiba's Virtual World along with the other participants aboard Seto Kaiba's Battle City quarterfinals blimp. Along with Shizuka and Honda, Otogi dueled Soichiro Ota of The Big Five with the stakes being ownership of his body and the ability to return to the real world. At one point during the game, after drawing the "Dice Dungeon" magic card, Otogi turned the arena into a Dice Monsters Dungeon, confidently telling Ota, "You don’t know me, but let’s just say I know a thing or two about dice."

Otogi helps Jonouchi when he collapses from his duel with Dark Marik, and he cheers for Yugi during the Battle City finals. He parts with the group at the end of the finals, slipping Shizuka his phone number, much to Honda's anger.

Otogi was again reunited with the group after saving Insector Haga and Dinosaur Ryuzaki while they were lost in America. He helped them when they convinced him that they were friends of Yugi's. He assisted Yugi, Jonouchi, and Kaiba against the Doma Organization and took part in a duel with Rebecca Hawkins against Valon. For most of this duel, his cards involved increasing the strength of Rebecca's dragon monsters. Despite summoning a powerful dragon, Valon beat them with his Armor monsters. Otogi and Rebecca's souls were not taken after their loss as Valon never played the "Barrier of Oreichalcos" during their duel. However, he was unable to give the gang support later on because of being in another place during Yugi and Kaiba's duel with Dartz.

Otogi tagged along with Yugi and his friends during the KC Grand Championship. During the final episode, he said that he has a date with Shizuka, and Honda and Jonouchi attack him for even saying so.

Otogi helped take care of Sugoroku Muto and contacted Yugi's friends and other important people, such as Pegasus J. Crawford, about Yugi's absence. He accompanied Yugi to the Ceremonial Battle. He witnessed the Pharaoh's departure to the spirit world and the sealing away of the seven Millennium Items. 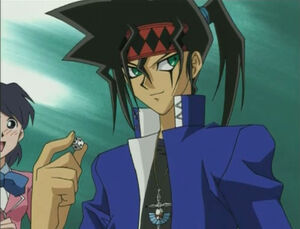 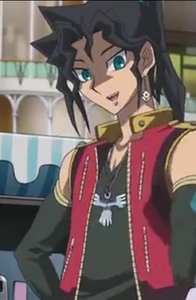 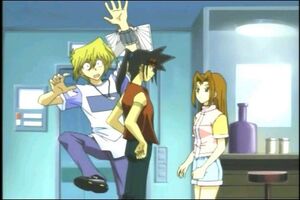 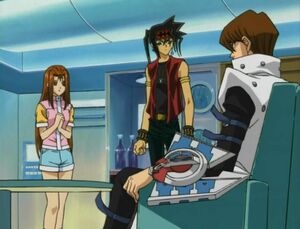 Otogi and Shizuka in Kaiba's quarter during the Battle City Tournament 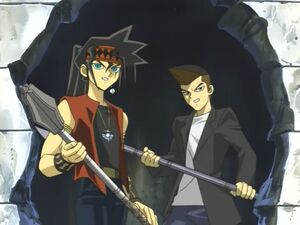 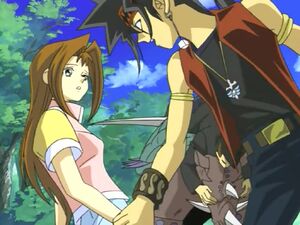 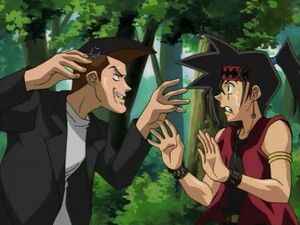 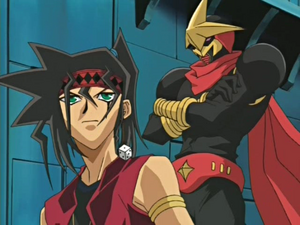 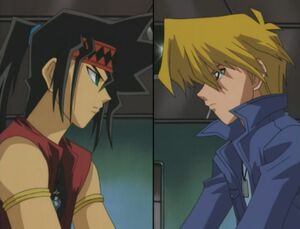 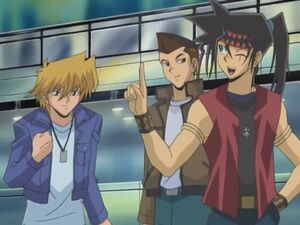 Otogi telling Jonouchi and Honda about his upcoming date with Shizuka... 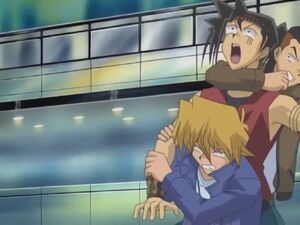 ...only to be ganged up by them for it 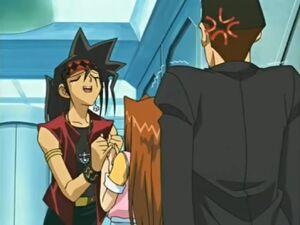 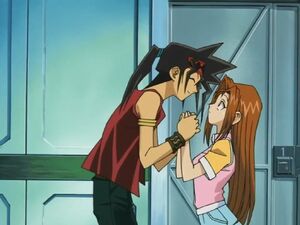 Otogi insist that he and Shizuka should search together... 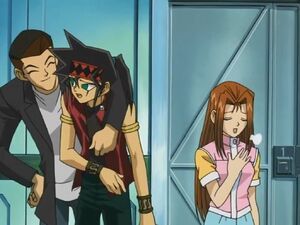 ...only to be pried away from her by Honda