Save the world from Dr. Proton and aliens. (All succeeded.)

Dr. Protoss and its robots.

Duke Nukem is the main protagonist in the Duke Nukem series. Duke is voiced by Jon St. John.

Duke Nukem has appeared in and starred in all 8 games of his series, while also making many appearances in other titles over the span of 20 years. He is one of the most iconic gaming figures of the 90s, and was very distinct from other shooter heroes at the time with his famous one liners and ultra macho personality.

Duke is a caucasian 30 year old American male with a blonde flat top hairstyle. His eye color isn't known, as he has never been seen without his signature shades. Tall, powerfully built, he has always worn a red tank top and blue jeans, with a belt that has the nuclear symbol as the buckle.

Duke is, bluntly, an ultra masculine, witty, politically incorrect, yet brave and heroic man. He frequently taunts his enemies and enjoys bringing them the pain. His character inspiration is plainly the action heroes of the 80s and 90s, delivering clever and funny one liners while their manliness gets them through even the most impossible situations. He loves women, and women love him, finding his might and bravado irresistible. Throughout his endeavors, Duke has become a global icon and is praised and loved as the greatest hero of Earth. He relishes his fame and is ultimately, despite his egotistical tendencies, a good man through and through. 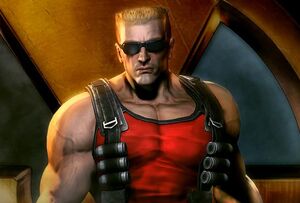 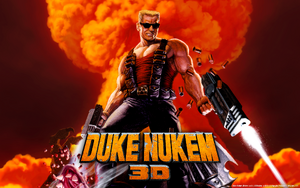 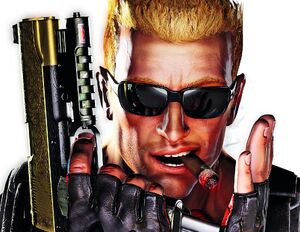