Granpuff (by Stuart and Falcon)
Dukie (by Smudger)
Bud (by No.2/Stanley)

Teaching younger engines how to do things properly

Duke, named after His Grace The Duke of Sodor, is one of the oldest engines on the Island of Sodor, and is considered a hero of all the engines. Also one of the wisest and most experienced engines on Sodor, Duke enjoys teaching others the proper way to do things. Other than being old, wise, kind and gentle, Duke maintains his authority at all times. He first tells Stuart and Falcon the story of Smudger (T&F)/No.2/Stanley (RWS). Duke tried to warn Smudger/ No.2/Stanley to be careful, but he took no notice. When the Mid Sodor Railway went bankrupt, some people came to buy the engines. Stuart and Falcon were sold, but Duke was not, for the buyers thought he was too old. After Stuart and Falcon had left, Duke was greased and oiled, then sheeted and locked away in a small shed for many years, hoping to be found and bought someday. Duke had decided to go to sleep, as he thought it would help time pass. As he did, everything outside the shed changed dramatically, it and the latter becoming surrounded by nature. One day, a group of adventurers found him, buried under the soil that had washed down from the mountains around the shed. Ebullient that he had not been forgotten after all these years, Duke was taken to the Skarloey Railway where he now lives and happily works again.

Duke only appears in Season 4. A large portrait of him is seen in various episodes, including Season 5. He makes a stock footage cameo in Season 7. It is unknown when he will return to the television series.

Duke is based off Prince, a George England "Small England" class 0-4-0 saddle tank tender locomotive from the Ffestiniog Railway in Porthmadog, North Wales. Built in 1863, Prince also has the distinction of being one of the oldest operating steam locomotives in the world. 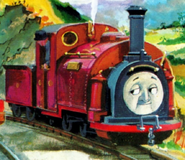 Duke in The Railway Series

Duke in the television series

A large portrait of Duke in the engine shed

Duke all alone in the shed, sheeted up snugly, and sleeping

Duke, after many years of being left in the shed, found by some rescuers

Duke bravely holding on to Falcon, who is teetering over the edge, with all his strength

Duke dozes happily in the sun

Duke with his “Picnic” train

Add a photo to this gallery
Retrieved from "https://hero.fandom.com/wiki/Duke_the_Lost_Engine?oldid=1735292"
Community content is available under CC-BY-SA unless otherwise noted.