Corporal Timothy Alloysius Cadwaller Dugan, also known as Dum Dum Dugan, is a supporting character in the 2011 film Captain America: The The First Avenger, and the Marvel tv series' Agents of S.H.I.E.L.D., and Agent Carter.

He served in the United States Army during the height of World War II, and after being saved by Captain America from the HYDRA weapons facility, he became a member of the Howling Commandos. After stopping HYDRA from attacking the west, Dugan became the leader of the commandos after Rogers was put in ice, and assisted the Strategic Scientific Reserve capture Werner Reinhardt and infilitrate a Leviathan base.

He was portrayed by Neal McDonough, who also played Damien Darhk in CW's Arrow.

Timothy Alloysius Cadwaller Dugan was born on April 11, 1912 to unnamed parents, and would go on to enlist in the United States Army during the height of World War II. He would reach the rank of corporal, and would become a member of the 69th Infantry Regiment alongside Sergeant James "Bucky" Barnes and Gabriel "Gabe" Jones. During the war, he would earn the nickname "Dum Dum Dugan", and fought against the Wehrmacht and HYDRA, a terroristic organization under the command by the Red Skull.

During the battle of Azzano, Dugan, Barnes and Jones were captured by HYDRA and taken a HYDRA weapons facility where he was forced to work on their weapons alongside the surviving members of the 107th Infantry Regiment. Dugan and Jones were forced to work on HYDRA weapons, as Barnes was experimented on with Dr. Arnim Zola's super soldier serum. While in a cell with his colleagues, Dugan was rescued by Captain America, who had arrived to rescue the American soldiers and his best friend Bucky. Dugan participated in fighting against HYDRA, and drove a HYDRA tank alongside Jones and James Montgomery Falsworth before arriving at the U.S. base with the captain.

Afterward, Dugan was recruited into the Howling Commandos, a group under the command of Captain America to fight HYDRA and stop their development of advanced weapons at bases. Captain America and the Howling Commandos became famous in the United States, which caused more Americans to enlist to fight in the war effort. During one mission, Dugan oversaw Captain America, Bucky and Jones capture Dr. Zola, at the cost of Barnes who fell to his "death". Chester Phillips would go on to interrogate Dr. Zola, and learned of the Red Skull's plan to attack the United States, and Dugan decided to participate in one last mission to assault the Red Skull's base. The mission was a success at the cost of Captain America sacrificing himself by going into the ice with the Valkyrie, much to the anguish of Dugan and his allies. After the death of Adolf Hitler, the war was won by the Allies, and Dum Dum Dugan celebrated the victory with his colleagues, with Falsworth raising his drink to Captain America and Bucky.

In season two of Agents of S.H.I.E.L.D., a flashback is shown of the Howling Commandos working with Peggy Carter in capturing HYDRA general Werner Reinhardt. Dugan then helped Carter and Jim Morita find and lock away all of the artifacts that the HYDRA scientists were working on to create advanced weapons and technology, and Dugan came across a blue creature, that was actually a Kree that was under the name "G.H." Due to the defeat of Red Skull and the capture of General Reinhardt, HYDRA was greatly wounded and defeated during the World War II era.

In Agent Carter, Dum Dum Dugan were still with the Howling Commandos stationed in Russia, and assisted Peggy and Jack Thompson a Leviathan base. Dugan and the Commandos helped Carter and Thompson infilitrated the Red Room Academy, and escaped from the base with Viktor Ivchenko. Afterward, Dugan gave his farewells to Peggy and Thompson, as they returned to the states to stop Leviathan as Dugan remained his temamates. He was later seen on vacation with Howard Stark, and learned from Stark that the French made Bikinis as Timothy saw a woman in Howard's pool.

Not much is known of Dugan after the war and assisting the SSR, but he would become well known for his heroics and bravery with the Howling Commandos. It's unknown if he was still alive in 2014, as Captain America had been thawed from the ice by that time by S.H.I.E.L.D. to become a member of the Avengers.

The Howling Commandos with Captain America, attacking a HYDRA base. 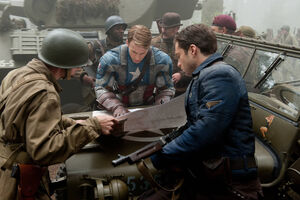 Dum Dum Dugan with his teammates.