Dume is one the protagonists that appeared in the BIONICLE series. He was the Turaga and leader of Metru Nui, though he was once a Toa of Fire before he gave up his powers, thus transforming into the Turaga.

He was voiced by Gerard Plunkett in the animated series.

Dume was the dark red Turaga. He also have a shrinken, dark red, armored body and also wore the white vest all over his body. He also wore the Kanohi Kiril.

Not much was known of Dume's background but it was revealed that he was the Toa of Fire for thousands of years, during which he once fought against hostile Rahi and Dark Hunters. Over 17,000 years ago, Dume confronted the Kanohi Dragon when the Rahi first attacked Metru Nui and heroically defeated the dragon, thus saving Metru Nui. Some time within the next two years later, Dume became the Turaga and was appointed as the Turaga of Metru Nui. Four years later, Dume summoned the group of Toa called the Toa Mangai into Metru Nui and appointed them as the guardians of Metru Nui.

Dume and Nivawk in the set form. 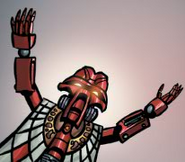 Dume as he appears in the comic.

Dume in Vakama's vision in the comic.

Dume was placed in the Matoran Sphere.

Dume during his time as the Toa.
Add a photo to this gallery
Retrieved from "https://hero.fandom.com/wiki/Dume?oldid=2059995"
Community content is available under CC-BY-SA unless otherwise noted.