Duncan the Tall, also known as Dunk, is one of the two titular protagonists (alongside King Aegon V Targaryen known as "egg") and the sole POV character of Tales of Dunk and Egg, a series of novellas written by George R.R. Martin set roughly 90 years before the events of A Song of Ice and Fire.

Ser Duncan the Tall and his unusual friendship with King Aegon V Targaryen are the subjects of the Tales of Dunk and Egg. These stories are The Hedge Knight, The Sworn Sword, and The Mystery Knight, the first two of which have been reprinted as graphic novels. A fourth short story, The She-Wolves of Winterfell, was intended to be published in 2012, but was postponed until an unknown date.

In these stories, Duncan is revealed to be an orphan boy from the poor quarter of King's Landing, the area known as Flea Bottom. He attracted the attention of a hedge knight called Ser Arlan of Pennytree, and squired for the old man, accompanying him to many tournaments and on at least one major campaign, an incursion into the Red Mountains of Dorne led by House Dondarrion to root out a bandit king. Ser Arlan died on his way to a great tournament at Ashford. Taking up his sword, armor and horses, Dunk competed in the tourney as a knight and was joined by a young boy called "Egg", who asked to become his squire, though Egg was later revealed to be the young Aegon Targaryen in disguise.

As his nickname attests, Ser Duncan was very tall, standing nearly seven feet in height as an adult. This puts him around the same height as Greatjon Umber, though not quite as tall as Hodor (who is in fact several inches over seven feet tall), but taller than Brienne of Tarth (who stands about six foot three inches).

His original name was actually "Dunk" - or rather, growing up as a street urchin in Flea Bottom with no knowledge of his parents or origins, that is the name he picked up as a small child and continued to use until Ser Arlan died (he doesn't remember how he got the name). When he entered himself into the tourney at Ashford as a knight, he was asked if "Dunk" was short for "Duncan", and he decided to say it was, because it was more formal and thus sounded like a better name for a knight (and for all he knew, maybe "Dunk" was short for "Duncan", given that he didn't know how he got his name).

It is strongly implied, but never outright stated, that Ser Arlan didn't actually knight Dunk before he died, but because the tourney at Ashford was strictly only letting knights enter, Dunk decided to lie and say that Ser Arlan had knighted him before his death. Any single knight can dub another man a knight, however, so for all anyone knew Ser Arlan actually did knight Dunk while they were alone on the road - squires are usually promised to eventually be knighted by the men they serve. Dunk was Ser Arlan's squire for years, and earnestly wanted to be a chivalrous knight, and Ser Arlan may have even promised to knight him at some point in the future, but then he died very suddenly from a chill while on the road to Ashford, before he got the chance. The matter is ultimately ambiguous.

Somewhat like the later Sansa Stark or Brienne of Tarth, Dunk became utterly enamored with Ser Arlan's teachings about the duty of a true knight to be chivalrous and defend the weak, and has a very idealized, almost Don Quixote - like belief in what knighthood is. While this strikes many experienced knights as naive, many commoners he encounters - used to being abused by greedy and selfish knights - come to admire his simple but honest belief in the vows of a knight to always do what is right and defend the innocent. During the tourney at Ashford itself, Duncan became smitten with a beautiful and tall Dornish woman named Tanselle, but when she was assaulted by the sadistic Prince Aerion Targaryen (for the flippant reason that she showed a dragon dying in her puppet show), Duncan walked up and defended her, punching Aerion so hard he knocked loose one of his teeth. Many cynically felt that striking a prince of the royal blood like this was suicidal and utterly naive - but others, including Aeron's own uncle Prince Baelor, were moved by how Duncan lived up to a knight's vow to always protect women from harm, and how he shamed all of the other wealthier knights who were ignoring Aerion's abuse.

Initially, Dunk wasn't a very exceptional fighter when he came to the tourney at Ashford. Ser Arlan had grown quite old and as they were often scrambling from one place to the next looking for work, he was rarely able to spend time giving Dunk more than basic training in the art of swordsmanship. Dunk had seen some combat with Ser Arlan, a campaign against a bandit lord in the Red Mountains. More of Arlan's teaching was in his verbal instructions about what chivalry and knightly behavior are, which he could give as they traveled. Dunk's one major advantage at the time was his great size and strength - but this was a poor match against a smaller but highly trained and skilled swordsman.

The pair of "Dunk and Egg" had many famous adventures. This included a visit to Dorne, where they were nearly killed by the apparently insane Lady of Vaith, as well as resolving a decades-long dispute between the houses Osgrey and Webber in the Reach. They also helped foil the Second Blackfyre Rebellion before undertaking a lengthy journey north to visit Winterfell.

Many years later Egg ascended the Iron Throne as King Aegon V Targaryen. Ser Duncan the Tall became a member of the Kingsguard, and later its Lord Commander. Duncan was one of the heroes of the Fourth Blackfyre Rebellion. Egg and Dunk faced their last adventure together at Summerhall, on the night of the great fire there, a fire that killed them both, in an attempt to bring dragons back to life. At the same time, Aegon's great-grandson, prince Rhaegar Targaryen was born. 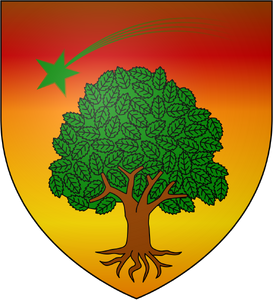 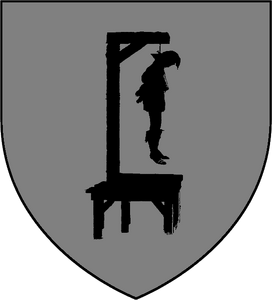 Duncan the Tall's personal coat of arms as the Gallows Knight (ASOIAF). 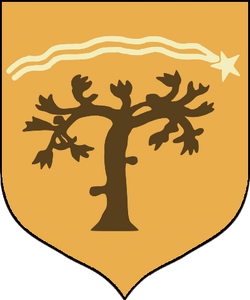 Duncan the Tall's personal coat of arms (Game of Thrones).