Dunkan Bulk, his full name "Dunkan Chris Bulk" is a hero as well as one of the protagaonists of the Hero Factory series. He was also known as "The Behemoth" and was also a member of the Alpha-1 Team.

Bulk was considered as the most strongly active hero of the Hero Factory. Although Bulk was very strong and was well-trained in his brute strength, he was not smart though. He was always ready for the mission and enjoys fighting for the Hero Factory about as much as he enjoys the actual fighting itself. 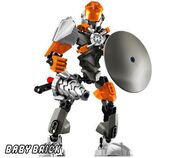 Dunkan Bulk in Invasion from Below. 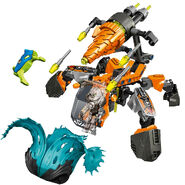 Dunkan Bulk in his Drill Machine.

Although Bulk did not take part in the mission of stopping the Fire Villains, later in one of the episodes where he and Stringer in the crowd were watching Akiyama Makuro congratulating Furno and the rest of the team for their courage. Bulk was also appeared in his 2.0 form.

Retrieved from "https://hero.fandom.com/wiki/Dunkan_Bulk?oldid=1680574"
Community content is available under CC-BY-SA unless otherwise noted.