He is an extraterrestrial space police robot with a strong sense of justice with the mission to eliminate the Evil Energy from the evil robot he fought. His left hand glows to absorb and destroy the Evil Energy, and his head possessed a radar for detecting the precise location of it.

In this arcade game, which was released before the events of Mega Man 8, Duo is a new playable character alongside the other returning characters from The Power Battle. He arrived back at Earth due to Dr. Wily trying to misuse the stolen alien energy, causing Duo to refer to him as a "deplorable creature" in disgust. In his ending of this game, he leaves Earth holding the alien energy , departing from Dr. Light and other playable character if the game was completed by dual players. After this, a text appears and says that his story would be found out in Mega Man 8.

Duo chronologically first appeared in the introduction of Mega Man 8 fighting in space against Trio. As they collide into each other, they fall towards Earth and those two crash on an island. Mega Man is sent by Dr. Light to investigate the island, where he finds and takes the broken Duo to Dr. Light while Dr. Wily is getting away with the Evil Energy. After Dr. Light begins to repair Duo, and the defeat of the first four Robot Masters in another side, Duo awakes and goes after the Evil Energy in Dr. Wily's hideout. There he finds, and fights against Mega Man thinking he wanted to interfere with his own mission, before realizing that he had a strong sense of justice. He then joins the heroic forces with Mega Man, helping him against Dr. Wily, and later saving his life as seen in the game's ending.

Duo appears as a secret playable character, who's unlocked through different methods depending on the region.

Duo returns to Earth in order to help deal with the invasion of Apollo and Luna's disastrous robot masters under the control of Dr. Wily. He is intercepted by Cloud Man, Ice Man, and Guts Man in a sewer beneath Thailand, but is saved by him and subsequently joins Mega Man's team.

Duo appears in Super Smash Bros. Ultimate as a advanced primary shield spirit that increases the user's fist attack. It spirit battle is a stamina battle on the omega form of the Wily Castle stage against two Captain Falcons with increased powers on neutral special attacks and super armor. 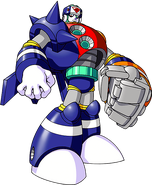