Scavenger of the Sweeper Group

Overthrow the Romefeller Foundation and OZ.
Defeat the Barton Foundation.

Duo Maxwell (デュオ・マックスウェル) is the pilot of XXXG-01D Gundam Deathscythe, one of the five Gundams and one of the five main protagonists sent to Earth in Mobile Suit Gundam Wing. He is an expert salvager and a member of The Sweeper Group, a group of salvagers and tinkerers.

He was voiced by Toshihiko Seki in Japanese

He wears his hair in a thigh-length braid and his signature outfit is a pair of dark, flared jodhpurs and a cassock-style shirt with a white turtleneck shirt underneath (giving it the appearance of a clerical collar). In the Endless Waltz movie, Duo wears what seems to be a red-zippered turtleneck underneath a leather motorcycle jacket with the sleeves rolled up.

On the exterior, Duo seems like a happy, charming, relaxed, and laid-back jokester, and for the most part he is; however, he is also a complex person with a terrible childhood that he hides from those close to him. He also deeply cares for his comrades and is never afraid to rush to their aide in battle.

Growing up as an orphan in the colony V-08744 of the L2 colony cluster with no knowledge his family or real name, he had a difficult childhood. He lived with a gang of other street orphans, having to steal for survival. However, one day, their leader Solo succumbed to a fever, and this was what inspired the unnamed boy to adopt the name Duo, announcing that the two will be Duo if Solo is with him.

Later the gang were taken in by the Maxwell Church. Everyone, including Duo, was eventually adopted, except for Duo being sent back by his parents. Thus, the Maxwells adopted him for themselves instead. He would get his signature braided hairstyle from Sister Helen during his time in the church. During conversations with Father Maxwell, Duo would also develop his belief in a God of Death from the deaths he witnessed.

However, in the next year, his parents would end up losing their lives as collateral damage from the destruction of the church. Anti-Alliance rebels were using the place as shelter. Duo stole a mobile suit for them, because they would leave the church alone in exchange for his cooperation. Unfortunately, he was too late and found his adoptive parents dead. Since that event, Duo took on the Maxwell surname.

Few years later, he would end up joining the Sweeper Group. He was caught by Professor G and the Sweeper Group stowing away on their spaceship, but he then decided to join them and became a Gundam pilot. Three years later, right on the day of Operation Meteor, Duo disagreed with the original destructive plan and attempted to destroy his Gundam Deathscythe; however, Professor G foiled the plan and suggested the more moderate alternative that only limited the assault on OZ.

His first assault on Earth was the destruction of an OZ mobile suit factory; there he destroys the main motor. Later, he would assault an Alliance fleet who was searching for the sunken Wing Gundam. After dealing with them, he would then take out a few of the OZ soldiers deployed from Zechs's submarine. There he would find the Wing Gundam, shut off its self-destruct sequence, and try to take it for himself. Unknown to him, Heero Yuy, the pilot of Wing, was also trying to destroy it himself. Duo first encounters Heero and attacks him under the assumption that he[Duo] was trying to save Relena Darlian from harm, as during that moment, Heero was holding her at gunpoint. To his surprise, she ends up protecting Heero and patches up his wounds. Later, the two mobile suits show up to surface. This catches Relena's attention, but Duo shines a bright light to prevent her from seeing what was considered classified information. Heero then gets up, evading Duo's shots, and fires the missiles he stole at the two suits. Duo was surprised that Heero knew Gundanium's impact tolerance and deduces that Heero, who is now floating face down in the water, was the pilot. Relena asks who the two boys were.

The next day, Heero ends up in an Alliance hospital and is strapped down due to being an enemy from the other side. Duo breaks into the hospital and helps free Heero. The two escape through a bombed window. While Duo slowly descends with his rotor gadget, Heero tries to plummet to the ground, concerning Duo. When Relena calls for Heero, the latter finally opens his parachute, but not early enough to completely mitigate his fall. He rolls down a hill, breaking his leg in the process; Duo eventually lands and explains that he was the best that Heero's got. After taking Heero to his[Duo] ship, he salvages both Gundams, which turn out to still be relatively intact, from the sea. While asking Heero to be thankful, he then notices the latter manually putting his broken leg together with his hands, which grosses out Duo.

Heero would temporarily stay with Duo on his scavenger ship, and one point Heero denies Duo's offer to help with repairing the Wing Gundam. While Duo points out Heero's flaws, the latter gets notified of a mission to stop an OZ carrier transporting Gundanium Alloy. That night, Duo wakes up to find Heero repairing Wing on his own before going back to sleep. The next morning, Heero takes off in his repaired machine, and Duo was impressed at Heero managing to fix his machine until learning that the latter actually stole parts from the former's Deathscythe Gundam.

He and Heero would see each other again during another mission. When Heero was able to complete the mission, Duo out of nowhere attacks the base too and meets up with Heero. When Duo tries to speak with Heero, it then looked like the two are about to face off. Heero fires, but it turns out he was protecting Duo from a Leo that tried to attack from behind. Heero then leaves, saying that he returned a favor to Duo. 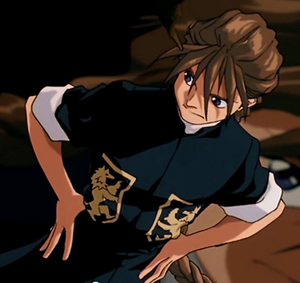 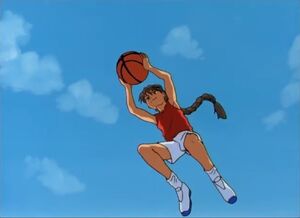