Dustin on the season one poster.

Dustin with Mike and Lucas.

Dustin with his friends, trying to find Will.

Dustin with Eleven, Lucas, and Mike. 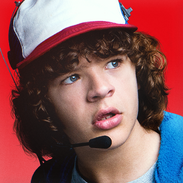 Dustin watching Mike and Will leave after Will has an "episode."

Dustin at the Hawkins Public Library.

Dustin showing Dart to his friends.

Dustin about to show Dart to Mr. Clarke.

Dustin shocked when Mike and Will stop him from showing Dart.

Dustin and Lucas listening to how Will saw a creature that looked like Dart last year.

Dustin upon realizing Dart is from the Upside Down.

However, despite this discovery, Dustin refuses to believe that Dart is dangerous.

The boys scared when Dart starts screeching inhumanly while inside the ghost trap.

After Dart escapes, Dustin begs his friends not to hurt Dart.

Dustin going to the Snow Ball. 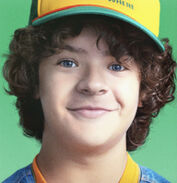 Dustin plays back his recorder where a song from one of Starcourt's carousels is being played.

Dustin shocked to discover the Russians are in Hawkins.

Add a photo to this gallery
Retrieved from "https://hero.fandom.com/wiki/Dustin_Henderson/Gallery?oldid=2013055"
Community content is available under CC-BY-SA unless otherwise noted.