Talking with his Friends

Get enough Money in order to escape the Law and the Pinkertons (Almost Succeeded, then Failed)

Dutch was the leader of the Van der Linde gang who he built with Hosea Matthews in 1974 and they terrorized the west for a long time eventually picking up new members (first one being Arthur Morgan).

Dutch's sanity deteriorated over time due to his ego and corrupting influences.

Dutch's personality is egocentric, Dutch is very self centered and narcissistic as he feels he is the story's hero and that he shouldn't be disagreed with because of all he's done to the gang members. This works out fine because stuff was mostly going well, but when Micah decides to betray Dutch by egging him on to do stupid plans and starts turning Dutch against the other gang members because the gang members started doubting him and Micah was a yes-man.

After the train robbery all of his gang members start to question Dutch and if he has a plan, his sanity deteriorates further when his longtime partner who helped Dutch build up the gang for 20+ years, Hosea Matthews dies along with Lenny after another of his botched robberies. after Hosea dies. This gives Micah Bell room to slide over and manipulate Dutch by acting as Dutch's yes-man, into becoming more ruthless with the promise of money, which keeps on making him worse and worse.

Eventually Micah gets so much control over Dutch, leading him to leave John Marston, Arthur Morgan, Abigail Roberts, and Sadie Adler to die at the hands of Mr. Milton and the Pinkertons to die. Additionally he starts using this feud between the government and the natives for his own benefit.

In the last mission, Dutch is persuaded to kill his brother, Arthur by Micah, and realizes he made a horrible mistake, however he doesn't take a side. Micah (depending on your honor) does the deed himself, or leaves him to die peacefully on the mountain or camp due to the incoming lawmen.

Years later in 1907 John and Sadie goes to Micah's cabin where he sees Micah and Dutch who is working with him because he does not want to admit he made a mistake. Now Dutch has a difficult choice between kill Micah and admit he made a mistake, or kill John and keep living this lie. He eventually admits it and runs off and disappear. leaving the Blackwater money behind for John and Sadie.

At this point in 1911 Dutch is one of the main antagonists and one of the last remaining members of the Van der Linde gang, being hunted by John Marston for the government. Eventually John corners him at the mountain and Dutch admits that he's made mistakes and tells John he can't change who he is and commits suicide by jumping off the mountain. 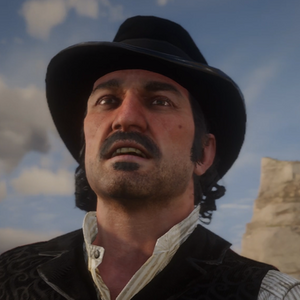 Retrieved from "https://hero.fandom.com/wiki/Dutch_van_der_Linde?oldid=2011091"
Community content is available under CC-BY-SA unless otherwise noted.