To save and protect people from Purgers (succeeded)

Dante "Dwayne" Bishop, also known as The Stranger is a major character in The Purge film series. He started out as a victim, but later became a Anti-Purge fighter to and the Purge once end for all.

He was played by Edwin Hodge.

Dwayne first appears as an unnamed wounded man (credited as Bloody Stranger) in the first film. During a Purge night in 2022, Dwayne is set upon by a gang of 'Purgers' but he manages to fight them off and kills one of the crew. Making his way into an affluent suburb somewhere in Los Angeles, he calls out for help. He comes across the Sandin household and is let in by their son, Charlie. During a confrontation between Charlie and his father, James, Dwayne disappears to another part of the house.

The Purgers pursuing him descend upon the house. Their leader compliments the family for the support of the annual carnage but sadistically warns James that they would murder everyone in the household should they fail to surrender Dwayne. After James admits to his wife, Mary, that their security system only acts as a deterrent for invaders and will not totally protect them against a heavy invasion force, he and Mary try to find Dwayne, who has taken their daughter, Zoey, hostage out of fear. They overpower Dwayne, tie him up, and aggravate his injuries. After seeing James with Zoey, Dwayne sadly tells James to take him outside, to which the latter hesitates after he and his family realize they are becoming essentially no different from the purgers outside. The Sandins instead spare Dwayne, leaving him bound, and prepare to defend themselves from the gang. After the gang breaks into the household, the Sandins fight them. James is mortally wounded by the gang leader, who is then killed by Zoey while the Sandins' neighbors, the Ferrins arrive to eliminate the other purgers. During the invasion, Dwayne frees himself of his bonds and decides to help the Sandins.

In the aftermath of the invasion, the remaining Sandins find themselves held hostage by the Ferrins and other neighbors, who harbor disdain for them due to their newfound wealth. Before the neighbors can 'cleanse' themselves of their hate, Dwayne kills one of the neighbors with a Browning Hi-Power pistol he stole from a murdered purger and holds Grace Ferrin hostage by threatening them to release the Sandin family. They sit out the rest of the Purge. When Grace Ferrin attempts to attack, Dwayne draws his gun to ward off the others and Mrs. Sandin breaks Ferrin's nose. The Purge ends and the neighbors leave. Mary thanks Dwayne, who appreciates her compliments then bids the family farewell by the words "good luck", before disappearing.

One year after the events of The Purge, in the year 2023, Dwayne is now the partner of Carmelo Johns, the leader of a successful anti-Purge resistance fighter group. He appears during one of the film's climaxes, wherein he and Carmelo lead the anti-Purge gang in storming a Purge arena to rescue the film's protagonists from wealthy purgers and their security forces. When Liz chooses to stay behind to avenge her husband Shane's death from the hands of the wealthy Purgers rather than join the group in their escape, Dwayne and Carmelo aid her while their team continues to eliminate the other wealthy purgers and their security group. Dwayne is first referred to as "Dwayne" during the events of The Purge: Anarchy.

In the third film, Dwayne assumes a new name, Dante Bishop, and has a new partner, Angel. The two are leaders of a new successful anti-Purge rebel group based in Washington, D.C. who supports the presidential candidacy of a senator named Charlie Roan, mainly due to her vow to end the Purge and help the needy after witnessing the death of her family during the events of the first film.

Bishop first appears when Roan accompanied by her head of security, former LAPD sergeant Leo Barnes and some of her supporters; shopkeepers Joe Dickson and Marcos and two EMTs, Laney Rucker and Dawn, seek shelter in an underground parking lot beneath a hospital which is converted to a medical center for Purge night and protected by his rebel team, after Roan's Purge night entourage evade a Neo-Nazi paramilitary team with the aid of a gang known as The Crips. He introduces Roan to the people in the shelter and converses with her.

After Roan is captured and delivered at a Purge mass in an NFFA-captured Catholic cathedral by Earl Danzinger, the New Founding Fathers of America–supportive leader of a neo-Naziparamilitary Purge group, to be executed by her rival, Minister Edwidge Owens and his superior, NFFA Chairman Caleb Warrens, Dwayne and his resistance group teams with Barnes and his group to rescue her. One of the shopkeepers, Marcos, assassinates Caleb Warrens and the anti-Purge group storms the church, instigating a chaos that leaves the entire NFFA congregation dead, aside from Edwidge Owens, and Harmon James, who escaped the initial shootout, but was later gunned down by Joe Dixon, who was killed by James. Bishop captures Owens in the cathedral's crypt wherein the latter goads the former on to kill him. Dwayne contemplates killing him, much to the horror of Barnes and Roan, the latter protesting that Owens must be spared as she chooses to win fairly. He spares Owens on the condition that Roan wins the election. Dwayne is killed by Danzinger after he and his group kills Danzinger's mercenaries. Barnes and Danzinger engage in a vicious melee fight wherein the latter is killed.

Dwayne in The Purge. 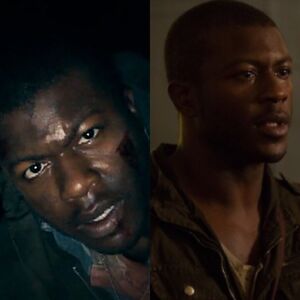 Dwayne in The Purge: Anarchy.
Add a photo to this gallery

Retrieved from "https://hero.fandom.com/wiki/Dwayne_(The_Purge)?oldid=1782256"
Community content is available under CC-BY-SA unless otherwise noted.