Dylan is the male protagonist and the main protagonist of 101 Dalmatian Street of the 101 Dalmatians franchises. He is the eldest sibling and eldest male puppy of the Dalmatian family, son of Delilah, the older brother of Delilah's other puppies, the stepson of Doug, the stepbrother of Dolly and her siblings and a descendant of Pongo and Perdita. 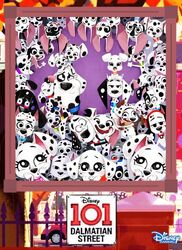 Dylan and his family
Add a photo to this gallery

Retrieved from "https://hero.fandom.com/wiki/Dylan_(101_Dalmatian_Street)?oldid=1386804"
Community content is available under CC-BY-SA unless otherwise noted.