Get Kirby onto the Halberd deck so he can stop Meta Knight from taking over Dream Land (both succeeded).

Dyna Blade is a character introduced in Kirby Super Star. She is a false antagonist appearing as the final boss of her titular game mode "Dyna Blade", and in "Revenge of Meta Knight", she plays an instrumental role in allowing Kirby to stop Meta Knight from taking over Dream Land. As the second final boss in the game, she also appears as a boss in the Arena sub-game.

Although she appears in later installments, none of these appearances are story-relevant.

"Dyna Blade" is the second story mode in Kirby Super Star. Dyna Blade has stolen everyone's crops, and Kirby must solve everyone's problem. After defeating Dyna Blade, Kirby sees that she was only finding food for her chicks, and pushes their nest under a Whispy Wood tree to provide apples for the young birds. Kirby flies with the birds back to Dyna Blade, and befriends the large bird.

In "Revenge of Meta Knight", Kirby must stop Meta Knight and his team from taking over Dream Land. To do so, Kirby must destroy their ship, the Halberd. Not long after landing on their deck, Kirby is stalled by a giant mech called the Heavy Lobster, giving the Meta Knights just enough time to take off, blowing Kirby off the deck. Kirby falls into the ocean, and climbs to a nearby island. Venturing through its dangerous forest as fast as he can, Kirby finds a warp star, which can get him back on the airship. This done, Kirby takes off after the Halberd. Tragically, he is shot out of the sky by a cannon on the airship, and, failing to offer much resistance to Meta Knight, the Halberd crew is confident that they'll succeed in their goal. Landing in a forest, Kirby ventures atop a mountain, where he meets Dyna Blade, who heroically carries Kirby onto the Halberd deck, sustaining severe damage while doing so. Dyna Blade sees the puffball for the last time when she takes a critical blow from one of the main cannons. Kirby is now able to show his true strength, successfully destroying both wings, as well as the reactor, despite many setbacks. He then beats Meta Knight in a fair duel and retreats riding on a Wheelie.

Dyna Blade can be summoned in the Kirby Quest sub-game as an Awesome attack to inflict high damage on all enemies.

Dyna Blade appears as an environmental hazard in her own stage, Dyna Blade's Nest. She periodically appears to attack the fighters who are rudely fighting in her nest. If the fighters do enough damage to her, she will only temporarily fly away, and cannot be permenantly removed.

A Dyna Blade Trophy is unlocked by completing All-Star Mode on Very Hard difficulty with any character. The sticker increases launch resistance by 46, and can only be used by Kirby characters.

Dyna Blade's spirit can be collected in Super Smash Bros. Ultimate can be summoned after obtaining Super Star, Beat, and Cucco. It is a legend-class primary spirit that boosts jumping ability. 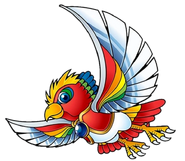