Defend China against all threats - both foreign and domestic.

Dynasty is a militarized team of Chinese superheroes in the Marvel universe.

When the super villain Mandarin sent an army of Dreadnoughts (robots) to attack the Three Gorges Dam in China, Dynasty together with Iron Man defended the dam from the attackers. Later Iron Man was kidnapped by Mandarin and forced to develop a new weapon for him, the Titanomechs. His friends contacted Dynasty, requesting their aid in requesting Iron Man who was being held on Mandarin City, an island near China. Dynasty went to rescue him and assisted Iron Man in defeating the Mandarin and destroying the Titanomechs.

During the invasion of Earth by the alien conqueror Thanos and his army of pirates, mercenaries, and outlaws (the Black Order), Dynasty was one of the superhero teams battling the invaders. In the process the team lost two of its members, one of which was the team leader (Star). Afterwards the team was disbanded. 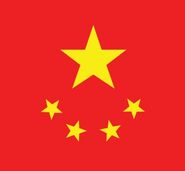 Retrieved from "https://hero.fandom.com/wiki/Dynasty?oldid=1690963"
Community content is available under CC-BY-SA unless otherwise noted.