Dynomutt is a mechanical dog superhero, introduced in The Scooby-Doo/Dynomutt Hour.

He is voiced by Frank Welker. In Harvey Birdman, Attorney at Law, he is voiced by André Sogliuzzo, who also voiced Monty in Stuart Little: The Animated Series, Puss in Boots in the Shrek video games, Smokey and Steamer, and McSquizzy in Open Season 3.

Dynomutt and his master, Blue Falcon, fight crime in Big City. Blue Falcon often addresses Dynomutt as either "Dog Wonder" or, when one of his malfunctions makes a bad situation worse, "Dog Blunder." 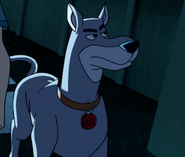 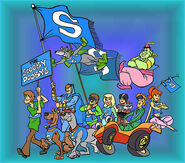 Retrieved from "https://hero.fandom.com/wiki/Dynomutt?oldid=2009189"
Community content is available under CC-BY-SA unless otherwise noted.