"Save" the E-Series robots. (succeeded)

E-102 Gamma (ガンマE-102 “Ganma”), or E-102 “γ”, is a fictional character in the Sonic the Hedgehog universe and is the second of Dr. Eggman's E-100 model machines. He is 215 cm (7 ft 1in) tall, weighs precisely 825.256 kg (1819.378 lb), and wields a machine gun on his right arm that can transform into a 15.5 cm smart missile launcher. His character designer was either Yuji Uekawa or Takashi Iizuka. He was first introduced in the game Sonic Adventure as a playable character. Being a robot, he has no gender, but Amy refers to him as a "he" when she stops the fight between Sonic and Gamma, and his voice actor is male as well. Gamma's gameplay involves the player utilizing his missile launcher to destroy enemies and eventually reach a boss/target within a given time limit. The more enemies the player destroys, the larger the score and extension of time for the given level. When Gamma reaches high speed, he crouches so he can roll on a set of wheels behind his feet.

E-102 Gamma is an intelligent creation of Dr. Robotnik's who is convinced by Amy to rebel against his creator thanks to the memories of the bird trapped inside, and who goes on to liberate those trapped in the other E-Series robots. Despite working for the evil Dr. Eggman, Gamma's kindhearted nature means he doesn't do anything malicious of his own accord; anything evil is only done on Eggman's orders and he's a pleasant robot otherwise.

E-102 is activated in Eggman's Mystic Ruins base, in the entrance annexe to Final Egg. Eggman immediately orders Gamma to enter Final Egg to test his shooting capabilities. Although Eggman believes Gamma to not be advanced as E-101 Beta, Gamma surprises Eggman and is tested again by battling Beta to determine who will serve onboard the Egg Carrier. Eggman is again surprised when Gamma wins. Gamma is granted permission on the Egg Carrier, Beta asserts himself to Eggman as if he wants to go along as well. Eggman reluctantly agrees, saying he could always use him for parts. The Egg Carrier takes off from Mystic Ruins as Eggman gathers the E-100 Series in the interior of the ship to announce his search for Froggy, who now possesses Chaos' tail and a Chaos Emerald.

The E-Series go off to different places to find it, but Gamma finds it first in Emerald Coast. After obtaining Froggy, he is transported to the past by Tikal. He tries to obtain data on the environment, but can't identify it. He walks to the Emerald Shrine, where he finds Tikal and the Chao. Tikal initially stops E-102 to protect the Chao, but upon further inspection she sees that he's not there to harm them. She mentions the "loving and gentle presence" guarding the Chao, Chaos, and introduces her problems with her father.

E-102 reappears in the room where the Froggy search was announced. All the other E-Series are there with frogs, but none of them are Froggy. Eggman is very aggravated, but then sees Gamma has captured Froggy. He punishes the other E-Series by beaming them off the Egg Carrier. He then assigns Gamma to get Birdiefrom Amy in the Egg Carrier prison, then return to Eggman. On his way there, a rotating piece of the floor sends him through the wrong door. In this room, he finds parts of Beta strewn on the floor and mechanical arms making adjustments to his body. Gamma seems to be startled. He then goes to the prison to retrieve Birdie. After arguing with Amy to hand Birdie over, including a discussion about Gamma's lack of feelings, Birdie flies up to Gamma's face. Triggered by an unknown force, he releases Amy from the cell and hears her promise that they can be friends.

Eggman, unaware of this betrayal, then orders Gamma over the intercom to pick up the Jet Booster, then head to the main rear deck. Upon arrival, he's ordered by Eggman, who has just taken the Chaos Emerald from Birdie, to fight Sonic. After defeating Sonic, Amy stands in his way, pleading with him not to finish him. Gamma stands down, then when the Egg Carrier begins to fall out of the sky, Amy talks again to Gamma, giving him an offer to leave Eggman and join them, then escapes with Tails. As Gamma escapes by hovering down to the Mystic Ruins, he deletes Eggman's data from his memory banks, marks him as an enemy, and embarks on a new mission to "save" his E-Series brethren - by destroying them.

Gamma destroys Delta in Windy Valley and Epsilon in Red Mountain, releasing the animals in both, but has no idea where Beta and Zeta are. He remembers seeing Beta on the Egg Carrier and heads off to its downed remains on the ocean. He locates Zeta in Hot Shelter and destroys him. As he stops to think about what E-Series remain, he sees E-101mkII fly overhead and follows him to a final battle on the front of the Egg Carrier. Gamma defeats E-101mkII, but as he approaches the downed robot it fires at him then explodes. A white bird emerges from E-101mkII and flies to Gamma. As it flies away, Gamma suddenly remembers: that white bird, itself, and Birdie are relatives. Gamma lies down and explodes, freeing a pink bird from inside him, which flies up to the white bird. Amy, also on the Egg Carrier and trying to help them reunite, arrives with Birdie, are reunited, and all three fly off into the distance.

Gamma appears in Super Smash Bros. Brawl as a sticker that increases the user's fire attacks.

Gamma appears in Super Smash Bros. Ultimate as a novice-ranked primary grab-type spirit. It spirit battle is a stamina battle against a red R.O.B. on Frigate Orpheon where the said R.O.B. starts with a ray gun with increased power. 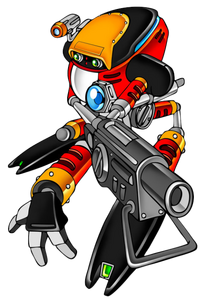 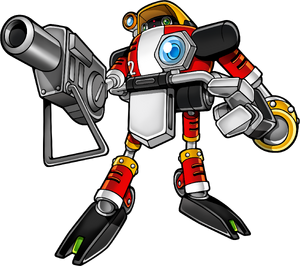 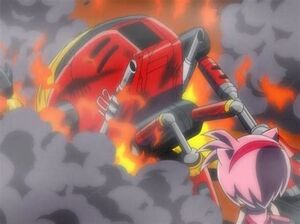