Heroes Wiki
Register
Don't have an account?
Sign In
Advertisement
in: Male, Video Game Heroes, Doctors and Scientists,
and 39 more

Help Mario and Luigi protect the world from Evil.

Professor Elvin Gadd, nicknamed E. Gadd (Karl Tastroff nicknamed K.Tastroff in French, referring to the French word "catastrophe"), is a supporting character in the Mario series and the deuteragonist of the Luigi's Mansion series. E. Gadd also appears as a supporting character in the first two games of the Mario & Luigi series. He's an eccentric scientist specializing in ghost hunting and inventing.

He is voiced by Japanese composer Kazumi Totaka, who also voices Yoshi and King Boo.

Professor E. Gadd is a small man with, for only hair, a small straight tuft in the middle of the skull. He has a tooth and always wears glasses, a blouse and brown shoes. His glasses have a spiral pattern.

He appears for the first time in the game when Luigi enters the Parlor on the second floor. As the trembling Luigi wanders in the room, he encounters an orange ghost that suddenly scares him. When it looks like the ghost is going to attack Luigi, Professor E. Gadd appears, sucking the orange ghost with the Poltergust 3000. Despite his efforts, he fails to suck in the orange ghost, but at least manages to drive it away. Afterwards, Professor E. Gadd presents himself to Luigi, explaining that the entire mansion is haunted. He says he is surprised at Luigi's courage to enter the mansion alone. Then Luigi and E. Gadd leave to the latter's laboratory after some ghosts materialize and try to catch them. E. Gadd has heard who Luigi is, how his life went and the backstory of the mansion. Luigi explains that he is looking Mario, who has been missing in the mansion for a while. Professor E. Gadd hands the Poltergust 3000 to Luigi and starts to train in the training room. After the training, Luigi then goes to the mansion with the vacuum cleaner and a flashlight. In addition to the Poltergust 3000, E. Gadd also provides him the GameBoy Horror, through which he receives tips and information from the professor.

In Luigi's Mansion 2, E. Gadd reappears during the game's cicematic opening. Here, he works in the laboratory of Gloomy Manor with the help of Greenie. At the same time, King Boo breaks the Dark Moon and disperses the fragments. The ghosts of Evershade Valley then become angry and ransack the professor's study room while driving him out of the place. The professor, after making an escape, reaches his bunker and wakes up Luigi by appearing on the screen of his television. He teleports him to his headquarters using the pager. It is here that the professor continues his research while giving missions to Luigi.

Professor E. Gadd returns again in Luigi's Mansion 3. For the first time in the series, E. Gadd was imprisoned in a painting by King Boo, and Luigi must find him so that he can help him find Mario, but this time, Peach and some Toads have disappeared with him. Just like in the previous installments, E. Gadd provides Luigi with a Poltergust and gives him advice from his portable laboratory, which is located in the parking garage on the basement floor of the Last Resort after he sets it up there.

Although Professor E. Gadd did not physical appear, he is referenced several times throughout the game. When Mario initially finds F.L.U.D.D. at the Delfino Airstrip of Isle Delfino, it says, "Thank you for purchasing this item from Gadd Science, Inc." . Later, Bowser Jr. says he acquired his Magic Paintbrush from "a strange old man in a white coat", referring to Professor E. Gadd. Bowser Jr. uses the paintbrush to pollute the entire Isle Delfino by painting it with goop, causing the Shine Sprites to leave the Shine Gate, and frames it on Mario by disguising himself as "Shadow Mario", and kidnaps Princess Peach under the mistaken belief that she's his "mama". This is a fitting description of Professor E. Gadd, which is further confirmed when F.L.U.D.D. seems to react in surprise to the statement. Bowser Jr. claims E. Gadd gave the brush to him of his own free will and that he did not know the professor's name when he received the brush, but it is unknown whether this is true or not. There is a symbol on both the Magic Paintbrush and F.L.U.D.D. showing a face and hairstyle similar to E. Gadd's, which seems to be the Gadd Science, Inc., logo. It appears on many of E. Gadd's other inventions, as well as the boxes for F.L.U.D.D.'s nozzle upgrades.

E. Gadd appears as the owner of Starbeans Cafe. When the brothers give beans to make a new drink, he appears to tastetest it (or has someone else taste it for him.) After he is finished,he would give the brothers a new special item that would help them with unique abilities, money or exp. If all drinks are made, he puts his portrait in the cafe, to which his employee says "It kind of stinks."

Professor E. Gadd is eccentric, friendly and intelligent as he is one of the world's greatest scientists and inventors. Due to his accent and way of speaking, E. Gadd often sounds like he's speaking in gibberish. In the sequels to Luigi's Mansion, while he retains his generally kind and helpful personality, he also shows a bit of a mischievous sense of humor, such as laughing at Luigi's expense when he gets frightened and playing small jokes on him, like trapping Luigi in a cage when he first introduces and explains how Gooigi works to him in Luigi's Mansion 3, initially pretending he has caught him in a trap, only to assure he was kidding and doing so to help him learn how to effectively use his new companion to get himself out. 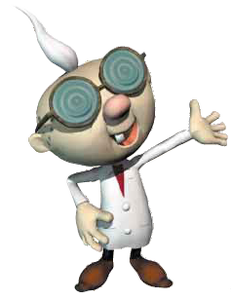 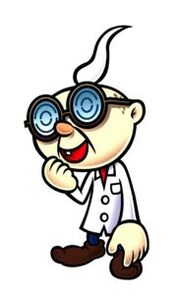 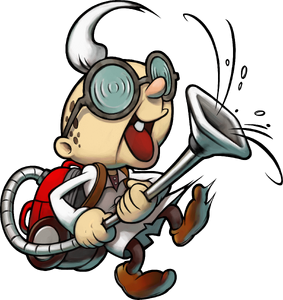 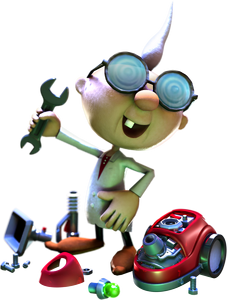 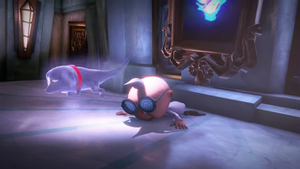 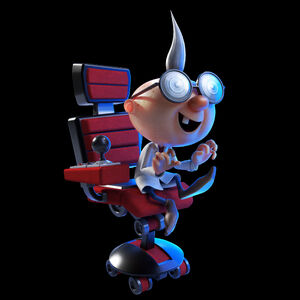 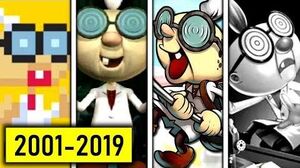 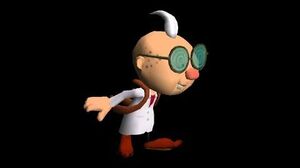