Sumo Martial arts
Edmond Honda, also known as E. Honda, is one of the major protagonists in the Street Fighter series.

E. Honda began his training in Sumo as a child and was determined to become the greatest sumo wrestler of all time. He eventually achieved the title of "Ozeki". Honda became upset that the rest of the world did not view sumo wrestling with the reverence of the Japanese. He entered into the second World Warrior tournament intent on showing everyone that sumo wrestlers rank among the greatest fighters in the world.

During the events of Street Fighter Alpha, he was challenged by Sodom to join Mad Gear. Honda won that fight and declined. Then he left to find worthy opponents and show the world that sumo is a powerful martial art. He fought Ryu on one occasion and later told Sakura where she could find her idol. His four students are Hatonoyama, Marunoumi, Yasuhanada and Nishinofuji.

E. Honda's themes A and B are soundtracks in Super Smash Bros. Ultimate, E. Honda appears as a advanced-ranked support spirit that gives the user a strong throw who only can be summoned using cores of Sumo Brothers and Piston Hondo. 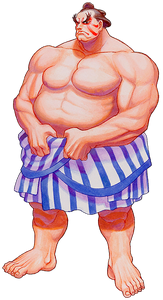 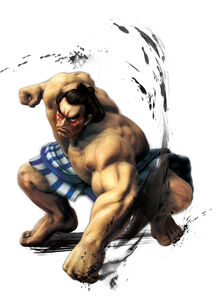