ECO 35-2 is the main hero from Rise of the Robots and it's sequel, Rise 2: Resurrection. He is also known as "Cyborg" or "Coton". He is a cyborg depicted as an athletic, bipedal humanoid surrounded by battle armour plating of a deep blue colour. Cyborg uses only his bare fists to face off against his enemies, yet is bulky and powerful. There are many differences between Cyborg and the other robots of the facility. Cyborg was the result of an extremely advanced project to successfully fuse organic and inorganic components. Although he feels pain, he still has a hardy resolve and is capable of taking much punishment. There are no microchips or electrical currents in his body; he has organic wiring and a human nervous system, which is why the EGO virus was unable to affect him. His organic components were cloned from the late CEO of Electrocorp who raised him and who Cyborg thought of as a father.

In Rise 2: Resurrection, Cyborg was defeat and absorb by the Supervisor, destroying his body and copying his brain patterns to the rest of her robots. Electrocorp scientists, fearing that Coton had been defeated and that the Supervisor would now target the city, prepared a counter-virus based on EGO from the information Coton had earlier sent them. Coton used the distraction caused by the malfunctioning robots to upload his consciousness to another robot, and prepared to either escape the Electrocorp building or to attempt another attack on the Supervisor. Whether Coton is successful in either attempt. 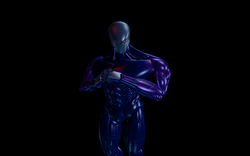 The Cyborg in Rise of the Robots.
Add a photo to this gallery
Retrieved from "https://hero.fandom.com/wiki/ECO_35-2?oldid=990490"
Community content is available under CC-BY-SA unless otherwise noted.