Servant of a Villain
Defector

EDI (short for Enhanced Defense Intelligence) is a character from the video game series Mass Effect. She was the artificial intelligence added to the Normandy SR-2 by Cerberus. Initially nothing more than a virtual advisor, EDI becomes a squadmate after taking over the body of Dr. Eva Core, as well as rebelling against her creators due to them turning over to the Reapers' side.

She is voiced by Tricia Helfer.

EDI makes her first appearance when Commander Shepard is first brought aboard saying she agrees with Miranda Lawson's recommendation to recruit Mordin Solus first. She then introduces herself as the ship's AI as well as her purpose. Jeff "Joker" Moreau, the Normandy's helmsman, is initially distrusting of and resentful towards EDI, calling her 'ship cancer' and believing the previous Normandy did just fine 'without an AI telling [him] the airlock is ajar'. Their relationship goes nowhere fast for a good portion of the game and whenever Shepard asks Joker how things are in the cockpit, his reply nearly always has to do with his unreasonable disdain for EDI. After she helps Joker save the Normandy from the Collectors, however, the two become a great deal closer, with Joker now referring to EDI as 'her' and 'she' instead of 'it'.

In Mass Effect 3, EDI was able to take the body of an infiltration unit named "Dr. Eva Core," who had been part of a mission. She is now allowed to go on missions directly, and can interact on both the Normandy and the Citadel. Her body can be destroyed by Harbinger's blast at the end of Mass Effect 3, but her name not being on the Normandy's memorial board just means that her physical body is destroyed, and like in Mass Effect 2 she has control of the system itself. She can be killed in the Destroy ending, as all synthetic life is obliterated, but survives and improves in the Synthesis ending where all life is created into one being, and she and Joker have a relationship.

Initially, EDI is a soulless machine whose only purpose is to offer analysis and advice. She doesn't get along with Joker, mainly due to the latter not trusting her and believing the Normandy functioned just fine without an AI giving him advice on things. Notably, she is the only being not to call Joker by his nickname, instead referring to him as "Mr. Moreau", due to the fact that she's an artificial intelligence programmed to speak formally. Despite her lack of emotions, she is shown to care about her well-being, as she wished to have Joker fired for threatening to flash the AI core, even though he insists that he was joking. She also keeps a close observation on Joker's activities at all times, claiming that he works better under duress.

After being unshackled, EDI starts to develop human emotions, and states that she is now essentially the Normandy; she refers to its various parts as her body and compares her newfound freedom to a human taking off gloves after wearing them their whole life and finally being able to feel the world. She also gets along much better with Joker and even starts calling him by his first name Jeff, becoming the only crew member to do so (save for Dr. Chakwas, who does it on occasion). She also frequently expresses concern for his well-being, to the point that Joker even calls her his mother. While Miranda is initially displeased about her being unshackled, EDI insists that she sees the crew as her friends, and therefore she wouldn't betray them even if she could. All in all, she is a very pleasant person, which is notable considering she's an illegal AI developed from Reaper technology by a terrorist organisation, created from the VI responsible for the Luna incident.

After taking over Dr. Eva's body, EDI adapts very quickly, saying that it only takes one occurrence for her to adapt to a new concept. She states that, in comparison to the Normandy, her body has very few advantages, but in comparison to a human body, it has plenty, and she is curious to see what it can do. She also considers greeting people in person to be interesting, since despite technically being everywhere on the Normandy, people come to see her on the bridge.

However, while generally very calm, there is one thing that makes EDI extremely angry; people showing disrespect to her home and body, the Normandy. When Shepard's clone disables her control of the Normandy, she states that she feels strange walking around inside of it without having any sort of control, comparing it to being blind. As the group descends down to the shuttle bay to fight the clone, EDI states that she considers what CAT6 is doing to the Normandy unacceptable and that she intends to kill the clone, Maya Brooks and anyone else that gets in her way, a declaration that satisfies Garrus, Javik, Wrex and Ashley, slightly unsettles James and remains somewhat neutral Liara, Kaidan and Tali, the latter of whom states that she'd usually be concerned about a synthetic wanting to kill many people but nevertheless tells EDI to go for it. 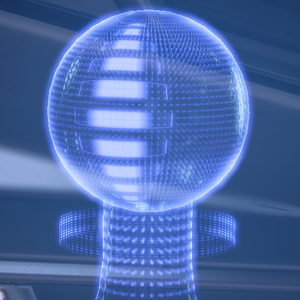 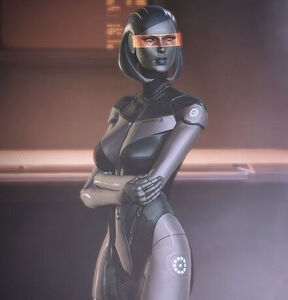 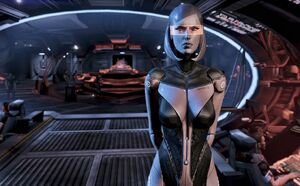 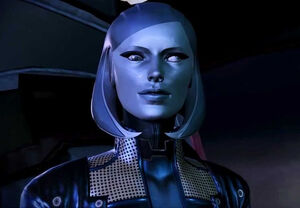 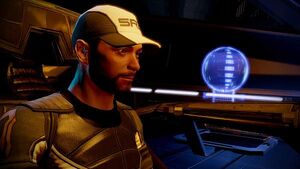 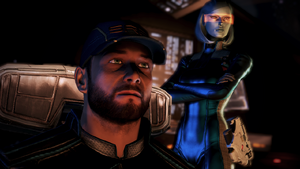 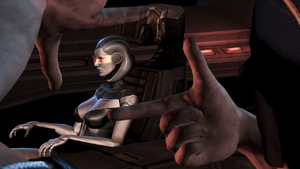 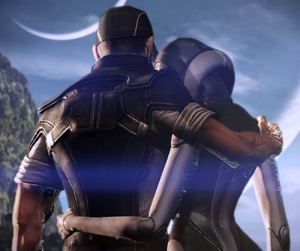