Find a living plant on Earth and deliver it to the Captain.

To care for WALL-E (both succeeded).

EVE (pronounced as "EVA" by WALL-E and M-O) is the deuteragonist of WALL-E. Her name stands for Extraterrestrial Vegetation Evaluator. She is WALL-E's girlfriend.

EVE can be trigger-happy and destructive, as seen at the early scene of the movie in which she was not hesitant to draw her powerful plasma gun and blew away anything that irked her. But in the later part of the movie, she mellows out to a degree and shows she can also be quite shy and kind.

Her personality was drawn out by her boyfriend, WALL-E. When the two first met, EVE didn't pay that much attention to him, but she found his activities, friendly demeanor and collectibles intriguing, which eventually led her to ask of his directive and name. In return, EVE told him her name and laughed at the way he pronounced it (EV-AH). EVE can be very stern and protective of WALL-E at times, as when she later found out he had boarded the Axiom alongside her, EVE wasn't happy since not only did she think that he would cause trouble, but that something bad would happen to him. When it seemed WALL-E and the plant had been blown up in the escape pod when it self destructed, EVE was initially distraught but then became relieved and very happy finding out he had survived. She also screamed in horror when AUTO overpowered and electrocuted him, whilst fighting for the plant he saved. But at times, when believing or seeing WALL-E in danger, EVE has been there to rescue him or put himself before her priorities. She helped him escape the Stewards when they were identified as "rogue robots". When trapped in the garbage airlock, EVE risks her own will to save him from being sucked into space. Once completing her mission, She rushes him to his truck, and quickly repairs and restores him.

EVE can show signs of embarrassment, something she seems to dislike. Notably when the plant was missing and Captain B. McCrea thought she was defective, EVE was saddened and became upset at WALL-E since she thought he had something to do with the plant's disappearance. This was also shown earlier in the film when she accidentally broke WALL-E's mixer and she pretended as if nothing had happened when WALL-E came back. She can also be very empathetic with others, including WALL-E himself. When seeing how much he did to protect her, she deeply regrets her initial behavior upon him and risks her life to help him.

Like almost all of robots in the film (such as WALL-E), EVE is very smart. A hilarious example of this was when WALL-E presented her an unsolved Rubik's Cube. After her turned away for a few seconds to retrieve a tape, EVE had already matched up all of the tiles, much to WALL-E's amusement.

WALL-E first meets EVE in the abandoned earth where he, along with several other WALL-E units were ordered to get rid all of the trash and compact them into cubes. WALL-E is quickly enamored and falls in love with her, following her around as she scans the area for any signs of life. While she initially threatens the little robot and his pet cockroach, Hal with the plasma weapon she's equipped with, she quickly dismisses them as a non-threat. WALL-E, unfazed by her aggressiveness, proceeded to follow her around and makes a couple of attempts to attract her attention. He doesn't give up when EVE dismisses his presence. Eventually, she starts to get frustrated of her negative results and ends up destroying an entire line of ships after she gets stuck to the magnet of one of them. After that, WALL-E gathers his courage to approach her and this time, EVE inquires about his directive and name, which upon being shown and told, she gives her name, except her directive, which is classified. WALL-E then helps bring EVE to his truck to take shelter from a sandstorm, where he shows her his collection of fascinating items he's collected over the years and even teaches her how to dance. When he shows her the movie, "Hello Dolly", he attempts to hold her hand, but EVE, confused of his strange nature, doesn't return it. Just as they begin to bond and grow closer over this though, he shows her a planet he just found, which upon scanning and getting a positive reading, she stores it inside herself and goes into standby mode with a green plant symbol on her chest, which WALL-E was confused for her being shut off permanently. Despite all of his efforts to wake her up from her state by doing various activities and dates with her, WALL-E was unable to find a solution to turn her back on and returned to his usual routine of compacting trash. Eventually, she's picked up by her return ship, with WALL-E, not wanting to lose her, acting as a stowaway.

Inside the Axiom, EVE is still in standby mode until she is ported to the captain's deck, where she encounters WALL-E following her to the bridge. GO-4 stole the plant from her body and she is very angry with WALL-E because she believes him to be the thief, WALL-E tried informing to her he didn't, but EVE gave him no attention. When WALL-E is discovered, the captain sends him to be cleaned. While in the repair ward, WALL-E believes the mechanics were torturing EVE and in an attempt to save her, shuts down the maintenance workings when mishandling her plasma gun, which frees all the reject robots there and causes the two to be designated as rogue robots, which EVE yells at him for. Later, she and WALL-E are shown on the Axiom's warning ads because of this, she angrily destroys one on the elevator. When arguing with WALL-E to try and send him back to Earth, WALL-E and EVE go after GO-4 who had stolen the plant from EVE. As WALL-E attempts to grab the plant, he is accidentally locked up in a pod. WALL-E almost gets blown up in it, much to EVE's concern, but thankfully, he escapes with the help of a fire extinguisher and hands her the plant. An overjoyed EVE kisses him and they begin to dance in space together in joy before flying back into the Axiom. Eventually, EVE realizes how much WALL-E had done to protect and care for her and started to return his feelings for him.

The captain is happy of the plant being found and was ready to go home. However AUTO refuses to return it to the holo-detector due to him having a secret directive to keep the Axiom in space forever, because of Earth was unsustainable of life. After AUTO and GO-4 stage a mutiny against the captain and try to get rid of the plant, WALL-E and EVE try to intervene, but AUTO electrocutes WALL-E, shuts down EVE and throw them both down the garbage airlock. Once rebooted, EVE manages to save WALL-E from being sucked out and they are thankfully inadvertently saved by a cleaning robot named M-O, who followed WALL-E into the airlock in hopes of cleaning him. WALL-E's circuit board was fried badly due to AUTO's shockwave. Despite EVE wanting to help repair WALL-E, he insists they need to get the plant where it belongs so they can return to Earth in order to fix him. After this, the two, accompanied by M-O flew out the airlock and rally the reject bots that WALL-E freed from the repair ward to defeat the SECUR-T bots and follow the captain's instruction to get the plant to the Lido Deck where the holo-detector is located, where the plant needs to be placed so that the Axiom can make the jump to Earth. The plant is dropped and EVE begins to search for it. Despite AUTO's attempts to shut the holo-detector off, WALL-E wedges against it and holds it open, nearly sacrificing himself in the process. Thankfully, the captain then succeeds in shutting down AUTO, while with the help of some passengers and the other robots, EVE places the plant in it, freeing WALL-E and allowing the captain to return the Axiom to Earth. She rushes to WALL-E's truck and subsequently tries to repair the badly damaged and crushed WALL-E with new parts, which succeeds, but then he seems to have lost his memories and just starts automatically going about his usual duties. However, after holding his hand and giving him a sad static kiss, his memories come back and his personality is restored. She and WALL-E are then shown in the credits with the other robots (including BURN-E from the Pixar Short) helping to restore the Earth.

In her first appearance, EVE is a playable character in air levels. She can shoot blasters at destructible objects.

EVE is a costume that can be unlocked from the WALL-E pack.

EVE appears as a townsperson.

EVE is one of the Main Storyline characters along with WALL-E.

EVE is a support character that, when activated, will fly across the board and clear a set of emojis in a spiral shape.

EVE is one of the playable heroes, along with WALL-E. 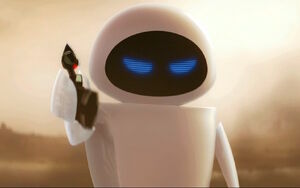 A bad date for WALL-E as EVE remains unresponsive after gaining the plant.

EVE searches for the missing plant.

EVE becomes devastated when believing that WALL-E is blown up with the capsule.

WALL-E and EVE falling in love. 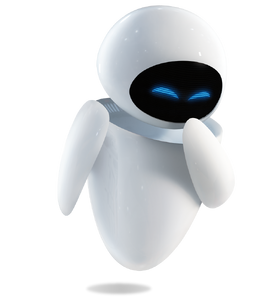 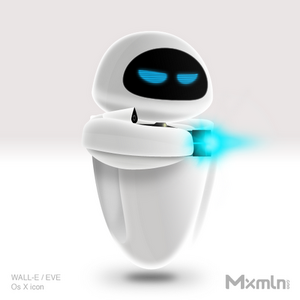 EVE with her plasma cannon drawn 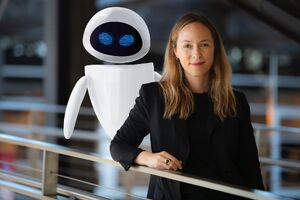 Woman behind the character 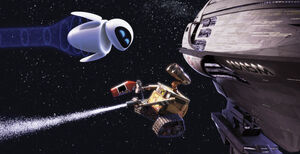