The Order of EZIC Star

The Order of the EZIC Star, or just EZIC for short, is a cult-like organization in the game Papers, Please.  They serve as a mysterious organization that plans on freeing Arstotzka from the corrupt, greedy government that controls it.   Depending on the choices that the Inspector makes, they can either help or hinder the group.  Siding with EZIC and accomplishing 4 of their 5 given tasks results in Ending 19.

Not much is known about the group's true intentions or their origin, however the group has asserted that it has existed since Arstotzka was established.

Thoughout the game, the group will send messengers to the Inspector, starting on day 8.  Their, a messenger will instruct him to hand a note to an individual named Corman Drex.  Once the task is executed, Drex will hand the inspector a cipher which reveals the names of two more EZIC agents that will be arriving in the days to come:  Mikhail Saratov (on day 11), and Stepheni Graire (on day 14).  Letting both agaents through the Arstotzkian border will cause the instructor to be cited for protocol violations, but this is required in order to obtain the good ending pertaining to the organization.  Ezic will reward the inpector 1000 credits for granting clearance to the first agent, but the money will be confiscated by M.O.A if they do not burn it ahead of time.

EZIC rewards the inspector 20 credits he succesully grants a third agent clearance into Arstotzka on day 17 and again when they poison a diplomat on day 20.

On day 23, a messenger instructs the inspector to kill a man in red in the line, and gives the inspector a key to access a rifle able to kill any individual.  However, should the inspector carry out the task, they will be arrested and later executed for murder (thus ending the game prematurly).  The inspector must fail to shoot the man in red in order to progress through the game.  It is later revealed that this particular individual later flees to the neighboring country of Kolechia, where he begins targeting EZIC agents stationed there, forcing the group to adapt to change their plans.

On day 27, Ezic request the inspector to confiscate a passport by a Kolechia diplomat and give to an agent impersonating the diplomat as a means to sabotage the actual diplomat's mission.

At this point through the game, several terrorist attacks will be orcestrated, but EZIC claims that it is not responsible for the attacks.

Finally on day 31, EZIC carries out a direct attack on the border by killing the guards and destroying the wall on the checkpoint that the inspector is stationed at.  Should the inspector complete at least four of the five tasks they were given by the messengers, they will be spared a grizzly fate as the wall is successfully destroyed, during the ending, it is revealed that EZIC has successfully overthrown the corrupt Arstotzkian government and established a newer one whose goal is to fight off corruption and greed.  The inspector is also made an official agent in the organization, and is implied to have been given better home and lifestyle as a result of the new government.

Alternatively, should the inspector fail to complete four of the five tasks, they will be killed by the organization on day 31 unless they tranquilize the members beforehand.  Doing this however will result in either ending 18 or 20 depending on if the inspector stays loyal to Arstotzka or flees to Obristan. 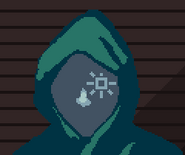 EZIC messenger
Add a photo to this gallery
Retrieved from "https://hero.fandom.com/wiki/EZIC?oldid=1557106"
Community content is available under CC-BY-SA unless otherwise noted.