Jessica Keynes is one of the two tritagonists of Miraculous World: New York – United HeroeZ. She receives the Eagle Miraculous, when inhabited by the kwami Liiri, can transform her into Eagle, a eagle-themed superhero.

Jess is a girl of medium height with black hair and grey eyes. She is of Native American ethnicity and wears her hair in traditional leather-bound side braids.

Sparrow is witty and supportive. Some instances make her exasperated when others are confused, but she supplies any information they need.

In the New York special, Jessica has a strong desire to prove herself as a hero sometimes leading her to being disobedient towards her superiors. She also enjoys helping others just as helping Adrien and Marinette admit their feelings. Like her mother she can be a bit judgemental as she overestimated Ladybug and Cat Noir. Jessica is also quite reasonable and acceptable when needing help from others. Likewise, Jessica laments that she and Aeon have been relegated to "babysitting" the French students to make sure they stay safe, and she wants to prove to the other heroes that she and Uncanny are just as capable as the adults. Sure enough, she gets her wish when she and Uncanny are the only ones who can help Ladybug and Chat Noir in the special's climax and she becomes the holder of the Eagle Miraculous.

As Eagle, most of her personality remains the same and Jessica was able to adapt quickly to her new powers.

Jess is as skilled as Luka Couffaine when playing the guitar. She is also skilled at skateboarding.

Sparrow is physically fit, having enough stamina and skill to keep up with Ladybug and Cat Noir while they're running and to jump from edge to edge down a huge crack in the ground.

When transformed into Eagle, Jess possesses enhanced strength, speed and agility. She is also given the power by Liiri to use Liberation which allows her to either free a person from their self-imposed limitations (being them mental or emotional) or to remind them of the boundaries and responsibilities that come with freedom, nullifying its effect. Her weapon appears to be a bullroarer.

When Marinette, Adrien and their friends go to New York for to celebrate Franco-American Friendship Week. They were saved by superheroes including Knightowl to neutralize a terrible villainous Techno-Pirate who has just seized the reactor. 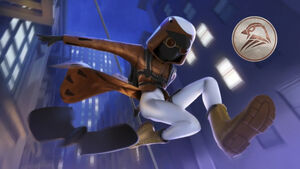 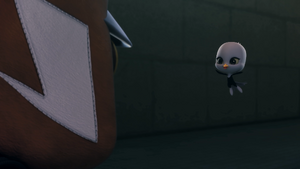 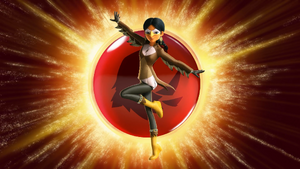 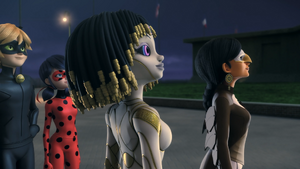