Mascot for a smooth product

Hanging with his friends

Earthworm is a major character in James and the Giant Peach.

He is voiced by actor David Thewlis who played Remus Lupin in the Harry Potter movies.

Earthworm is a blind, talking earthworm who is like an uncle figure to James.

He is usually pessimistic about everything, and is shown to hate being used as bait in order to attract some seagulls, which aided them in flying the peach out of danger when they were being attacked by a robot shark. However, when James enlightens Earthworm on how great a hero he was, Earthworm accepts this and even dubs himself "Wonder Worm."

He first appears when James climbs inside the peach, having been transformed. He is blind, so he often assumes that situations are worse than they really are, and is also ticklish when Centipede tickles him. According to Earthworm, he had a mother, brother and some sisters, all of whom were killed in some manner. He accompanies the others on their journey to New York City, having to be bait in order to do so, preferably when attracting seagulls and fending off a robot shark. He and the others are separated from James during an attack from The Rhino, but they later reunite with James, who has transformed back into his normal form, and he aids in the capture of Spiker and Sponge. He later lives with the others in Central Park, and becomes a mascot for a new smooth skin cream product. 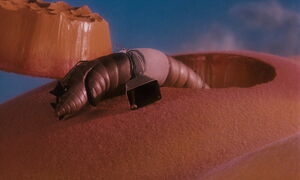 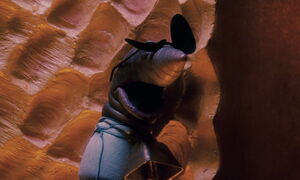 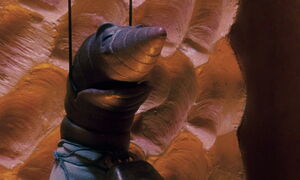