Echo (real name Maya Lopez), previously known as Ronin, is a fictional character and superheroine from Marvel comics, appearing as a supporting character in the Daredevil, Moon Knight and New Avengers comics.

She is the deaf adoptive daughter of Kingpin who was his pawn in his attempt to get rid of his archenemy Daredevil, Maya learned the truth and decided to become an adventurer. Despite her disability, Lopez has a photographic memory that allows her mimic anyone she fights, allowing her to deal with any opponent she faces. She is a member of the Daughters of the Liberty, and has been a member of the New Avengers and Earth-TRN852's Avengers.

Maya Lopez was born to the Cheyenne William Lincoln and an unnamed mother, and her father was secretly a mob enforcer who served under crime lord Wilson Fisk. She was born deaf, but her family didn't realize this until she was older as she was incredible at lip reading. Her father would be killed by Fisk when the latter found no use to him, but asked Wilson to look after his daughter once he was gone. Maya discovered her dying father, who proceeded to place his bloody hand on her face, leaving a blood handprint. Lopez mourned the death of her father, but wouldn't learn that Fisk was the one that killed years later. Taken in by the crime lord, Maya was raised by him and enrolled into the school for gifted once he saw her photographic skills.

Acting as the Kingpin in New York, Fisk found his criminal empire threatened by the vigilante Daredevil, and attempted to kill the latter on numerous occasions. Running out of options, Fisk decided to send Maya to kill the vigilante by telling her that Daredevil killed her father. Believing Fisk's lies, Maya started to watch footage of Daredevil fighting the assassin Bullseye, allowing her mimic the vigilante's abilities. She confronted the man without fear on several occasions under the name "Echo", but Daredevil was able to explain himself and that he didn't kill her father. Once she realized that Fisk had tricked her, Maya returned to him and shot him in the eyes, which blinded the crime lord instead of killing him.

After the recent events, Echo decided to leave New York to rediscover herself, and returned to her father's reservation where she through a vision quest. During her quest, she encountered Wolverine, whom she believed to be an animal spirit, but realized her mistake and apologized for her actions. She later returned to New York and became a performance artist, where she reconciled with Daredevil.

She would turn to vigilantism after assisting the New Avengers, as she encountered them since Daredevil had recommended her to Captain America. Adopting a new identity as the ninja "Ronin", Lopez started to target criminal organizations such as the Hand and the Yakuza in Japan. The New Avengers would return the assistance in helping her fight against Madame Hydra and the Hand, and though she became a member of the team, she remained in Japan to watch the Hand's activities. Having heard rumors that Elektra was running the Hand, Lopez continued her investigations, but was later killed by Elektra. Before she was killed, Lopez managed to leave a note and her Ronin armor and had it sent to the United States, as she wanted to be avenged by Daredevil.

Some time after the events of the Civil War storyline, Lopez was resurrected by Elektra and the Hand to be given a drug that would make her join their organization. Though the treatment was stopped by the New Avengers' arrival, Lopez received some of the drug, which made her turn against her allies. However, Doctor Strange and Iron Fist were able to remove the drug from her, allowing her return to her normal state. She then proceeded to kill Elektra, but it was revealed that is actually a Skrull in disguise. After the incident, Lopez was given the armor back by Hawkeye, but she decided to give him to him as a gift and returned to her previous name. Lopez remained at Doctor Strange's sanctum sanatorium until it was destroyed during the World War Hulk storyline, as Bruce Banner returned and wanted revenge against the Illuminati.

Later on, Maya remained with the New Avengers and assisted the Mighty Avengers when New York was plagued by the Symbiotes invasion. Once the symbiotes were dealt with, Lopez entered a relationship with Hawkeye, and assisted the Avengers in dealing with the Skrulls' invasion. After the Skurlls were stopped, Echo traveled to Los Angeles and infilitrated a criminal group as an undercover stripper, where she encountered Moon Knight. Breaking her cover to help the vigilante, she would assist him in fighting Count Nefaria, but she was killed by the supervillain. However, she was revived by unknown reasons, and returned to New York to stop Klaw from taking over the city.

During the Enter the Phoenix storyline, Echo was empowered by the Phoenix after the entity created a contest to see who would be it's next host. Despite being defeated by Namor the Sub-Mariner, the Phoenix found itself drawn to Echo's suffering and her ability to adapt, and decided to keep Maya as her host. 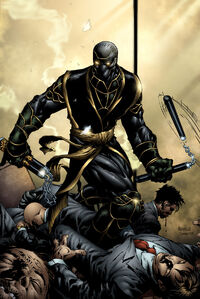 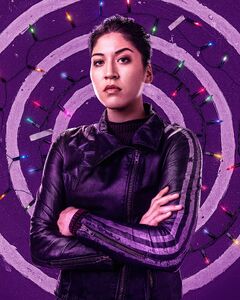 Alaqua Cox as Echo in the Marvel Cinematic Universe.