To serve the Republic and bring an end to the Clone Wars.
Find Captain Rex (succeeded)
Survive against the Galactic Empire

Echo (CT-1409) is a major character in Star Wars: The Clone Wars and one of the three triagonists (alongside Wrecker and Tech) in Star Wars: the Bad Batch. is a soldier of the 501st Legion and the last surviving member of Domino Squad, later a member of the Clone Force 99.

He had an tendency to repeat his orders to his teammates during their trials, regardless of if they actually heard them in the first place. Shaak Ti says he never adapts to the situation.

After his rescue on Skako Minor, Echo remained loyal to the Republic and Rex. However, his personality had changed compared to before, he no longer repeated orders but continued to criticize the situation or the plans of his new teammates. He also spoke more candidly, openly expressing his personal views like his contempt for the Empire, his skepticism for the mercenary life or that Wrecker might miss Crosshair after he is shot.

Ever since he had participated in the Clone Wars, Echo looked down on the separatists, especially after his accident at the Citadel. During a rescue mission to Raxus, Echo wasn't comfortable rescuing a Separatist Senator or working alongside a Separatist Droid throughout the mission. When he saw that Senator Singh was torn at having to leave his beloved people, The Clone finally let go of his old grudge and encouraged Singh to continue the fight.

What has not changed about Echo is undoubtedly his friendship with Rex whom he continued to hold in high esteem during the Imperial Age. He even thought that joining Rex's cause was what the Bad Batch should have done, adding that they are soldiers and nothing else. This shows that even since his last days as a junior, Echo still has difficulty adjusting to the situation.

He, Fives, Hevy, Cutup, and Droidbait were members of Domino Squad; a fireteam that was on the verge of being decommissioned on account of their constant failures in their training exercises.

He was brought into the 501st Legion by Captain Rex after the downfall of his own squadron. During the mission of the Citadel, Echo was thought to have been killed, but was actually taken prisoner by the Separatists before he was rescued by Rex and Clone Force 99, which Echo later joined after helping save Anaxes from falling to Separatist control.

Shortly after his rescue, Echo and the Bad Batch were dispatched to Kaller to assist Jedi General Depa Billaba and her padawan Caleb Dume. On their own, they wiped out the droid forces overwhelming Billaba's forces with their creative and unorthodox method. After the development of the potential end of the war by the decisive confrontation between Obi-Wan Kenobi and Grievous on Utapau, the Bad Batch got the green light by Billaba to manage the last bastion of local droids in their own way accompanied by Caleb. Sadly, Echo and his teammates halted their progress when they saw their own brothers-in-arms suddenly attacked and killed Billaba, after Darth Sidious issued Order 66. After Caleb fled into the forest, Echo was still confused at what had just happened even after Tech revealed the existence of Order 66 which was unknown to Bad Batch. While Hunter and Crosshair pursued Caleb, Echo and Tech interrogated Captain Gray and discovered that Order 66 is an order to exterminate all Jedi for treason.

Later, the team returns to Kamino to later learn of the end of the war while noticing that the clones behave strangely. Back in their neighborhood, Echo is outraged that Billaba's clones could have so coldly turned on her after years under her command. Tech then informs his comrades that the clones were actually programmed from birth to obey blindly but that their genetic mutations made them technically immune while the severe damage Echo suffered wiped out all programming. The team then witnessed a speech by now Emperor Palpatine about the Republic's transformation into the Galactic Empire, much to Echo's disgust.

After the speech, the Bad Batch met Omega, a young girl serving as medical aid to Nala Se who has a deep admiration for them because of their deviant nature. During a mess in the dining hall caused by Omega and Wrecker, Echo notices Admiral Tarkin, the same man he had gone to rescue at the Citadel on the day of his accident, observing the incident before the clone got hit with a plateau. Waking up in the infirmary, Echo informs his teammates of Tarkin's presence on Kamino, especially noting that he's not someone who likes clones. The team is then called to the training center to be evaluated by Tarkin in person. Training takes a turn for the worse when Tarkin brings up live-fire droids but the Clones win anyway. Caring more about loyalty than skill, Tarkin sends Clone Force 99 to Onderon to stop separatist insurgents.

Once on Onderon, they find the insurgent camp but Echo notices that something is wrong when he notices the presence of children. They are suddenly ambushed by armed Onderonian who bring them in front of Saw Gerrera where Echo realizes that all these people are not insurgents but veterans of the republic. Gerrera explains to the clones that he refuses imperial domination, while exposing the lies of which the empire is capable. After the rebel leader is let them go, advising them to adapt and survive or die with the past, Echo quickly challenged Crosshair's insane loyalty to the empire despite the evidence that the refugees were innocent, unaware that the order 66 affected him. Hunter then destroys a Probe Droid sent to them by Tarkin, making him realize that Omega's warning was valid and decides to return the sought after Tech is revealed that Omega is a deviant clone like them.

Upon their return, they are arrested and accused of treason by Tarkin. With Omega's help, the Bad Batch manages to escape their cell and return to the hangar where all their equipment is stored. Sadly, they come face to face with the Shock Troopers and Crosshair whose chip effects were amplified by Tarkin to make him completely loyal to the Empire. After exchanges of gunfire and a Wrecker injured by their former teammate, the four clones manage to escape Kamino with Omega on board. 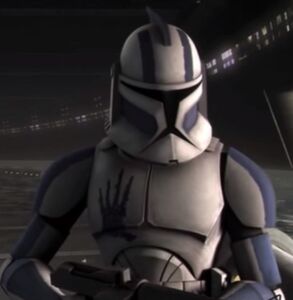 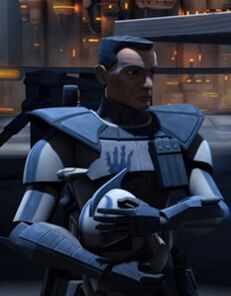 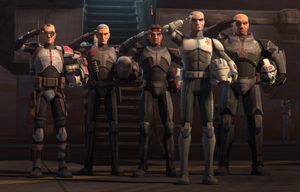 The Bad Batch witnesses the activation of Order 66.

Echo with Wrecker as they listen to a broadcast of Chancellor Palpatine's speech.

Echo surprised when Palpatine demolishes the Republic, transforming it into a Galactic Empire.