Save the world of Zenonia

Protector of the Innocence

Ecne is the heroine of Zenonia 2 and one of the 4 characters to play as. A treasure hunter who is off to revive her deceased older brother Jade.

Ecne is a young woman with long curly blonde hair and blue eyes. She is shown wearing a revealing outfit with a white collar with a golden necklace, a long blue coat with a sliver bangle on her right arm, and her feet has blue socks with sliver boots.

Ecne can be funny or serious sometimes. She can quick to anger but she is helpful and caring towards others in the world.

Ecne memories were lost due to the due to the Tree of Life’s leaves falling to ground and the game shows a flashback of her and her older brother Jade, who has blonde hair like her. he told her that he would like to go an a adventure, and Ecne promises to find him. One time, she left brother behind to find a treasure chest and he brother was killed offscreen in the ruins while treasure hunting.

In the present time, one of her friends informed her about a treasure in shop. But she a headache. She and her friend are trying to find out the code but the guards caught them and threw her in the dungeon with Lu, Morpice, and Daza, other 3 playable heroes. The 4 attempted to escape but they found by guards and was taken to Zavkiel, the chief of guardians. He requested the heroes to find the 4 missing gems. Ecne accepts the mission in order to revive her late brother Jade.

Her backstory shows that she left her brother Jade behind while treasure hunting in a ruins and her brother died offscreen and she found out that he disappeared.

Ecne’s name is mentioned by Regret when he tells Chael the story of the 4 heroes of Deva.

Ecne is the commander of Deva castle. She is not shown that much in the story. 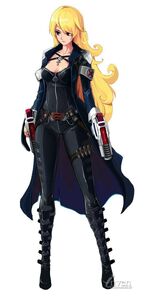 Retrieved from "https://hero.fandom.com/wiki/Ecne?oldid=2006237"
Community content is available under CC-BY-SA unless otherwise noted.