Edward, also known as Ed, is the older brother of Sarah, a member of The Eds (which also consists of his best friends Double D and Eddy) and one of the three main protagonists of Ed, Edd n Eddy and of Ed Edd n Eddy's Big Picture Show. He is, without a doubt, the strongest of the three Eds and the dumbest, and rivals up there with Rolf for strongest on the show itself, having lifted homes and cars with little to no effort. In a nutshell, though, he can be described as kind-natured and absentminded, barely paying attention to current situations enough to truly learn from them. Yet despite his lack of focus on the day-to-day, he is fully focused on his movies and comic books, and commonly misinterprets them as reality. Even worse, though, than his inability to differentiate reality and fiction, is his hygiene, which to say the least is filthy. His low hygiene does provide humor though, even if a bathtub of gravy is disturbing.

He is voiced by Matt Hill, who also voiced Soarin, Kom, Tenderheart Bear and Booma.

Ed is tall with yellow skin. He has ginger hair styled as a buzzcut, making it look black and a unibrow.

Ed's attire consists of a red and white stripped t-shirt underneath a green jacket. He also wears light purple trousers and black shoes. Ed's attire remains the same during autumn and winter though he will zip up his jacket. 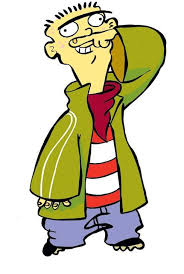 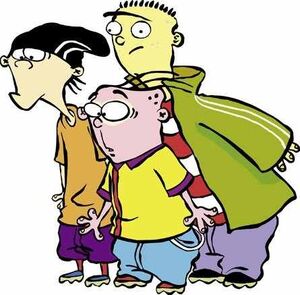 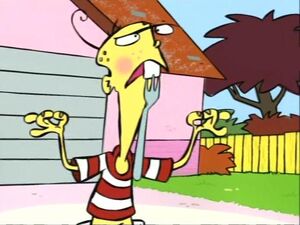 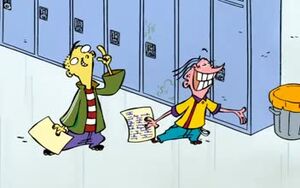 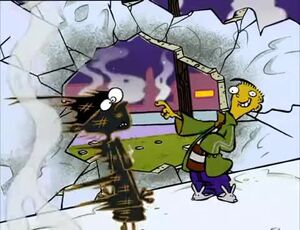 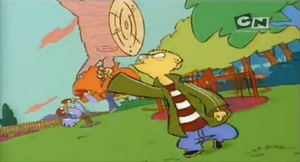 Ed goes on a furious rampage. 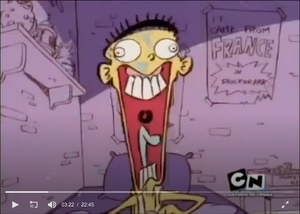 Ed's comical scream when he wakes up from his nightmare.
Add a photo to this gallery

Retrieved from "https://hero.fandom.com/wiki/Ed_(Ed,_Edd_n_Eddy)?oldid=1915079"
Community content is available under CC-BY-SA unless otherwise noted.