Lord of Winterfell
Warden of the North
Hand of the King
Regent Protector of the Realm (briefly, unacknowledged)

Save his sister (failed).
Discover the reason of the death of Jon Arryn (partially succeeded).
Keep the King's peace and justice in the Seven Kingdoms.
Give the Iron Throne to Stannis Baratheon.
Return to Winterfell (all failed).
Keep Jon Snow hidden from Robert (succeeded).
Save Robert Baratheon from the Queen (failed).

Eddard "Ned" Stark is the posthumous central protagonist of A Song of Ice and Fire and its TV series, Game of Thrones. He is the main protagonist of the first novel, A Game of Thrones, and the first season of the television adaptation. He was the head of House Stark, Lord of Winterfell, and Warden of the North in the continent of Westeros. He was made Hand of the King by his good friend King Robert I Baratheon.

In the TV series, he was portrayed by Sean Bean, who is also known for playing Boromir, and played by Robert Aramayo young and Sebastian Croft as a child.

Ned is the second child of Lord Rickard Stark and his cousin-wife Lyarra Stark. He's the younger brother of Brandon Stark and older brother of Lyanna and Benjen Stark. He was married to Catelyn Tully and they had five children, Robb, Sansa, Arya, Bran, and Rickon. Alongside his five children with Catelyn, Ned also raised his nephew Jon Snow as his own son, who Ned presented as his illegitimate child and kept the truth of Jon's parentage (Jon is the son of Lyanna Stark and Rhaegar Targaryen) a secret to protect him from Robert's wrath.

Ned discovered evidence that the king's successor, Joffrey Baratheon, and Joffrey's two siblings were actually the children of Queen Cersei and her brother Jaime Lannister. However, before he could tell King Robert Baratheon, Robert died from a hunting accident, partially brought about by his wife. Ned intended Robert's eldest brother, Stannis Baratheon, to succeed Robert. Meanwhile, Robert's ambitious youngest brother Renly Baratheon decided to usurp the throne himself and fled King's Landing.

When Ned accused Joffrey of not being the heir to the throne, Ned was seized for treason and killed at Joffrey's order against the will of the Lannisters, who where hoping for an early end of the conflict in order to deal with the Baratheons. His death, among many other things, helped spark the War of the Five Kings. The North was outraged by his death and declared Ned's eldest son and heir Robb the King in the North. Though he didn't love Ned and even resented him, Stannis is still determined to have justice for Ned's death.

Eddard Stark is known throughout the Seven Kingdoms as being a man of honour, virtue and principles. His sense of right and wrong, justice, fair-play, compassion, valour and unbendable moral compass was unfounded in most Head of Houses, many of whom are ruthless warlords combined in a bid of power. He always encountered and dealt with a situation in a calm, reproachable manner and did his best to avoid violence or extreme actions but will carry out on them if he has no choice. As Warden of the North, Eddard never frayed from his duty. He was neither fond of performing executions but did them anyway as he lives by his own code of "the man who passes the sentence should swing the sword".

Eddard was known to not judge people by their classes or status. Despite Theon Greyjoy being a prisoner, he was also made a ward of the Starks and Ned allowed him to eat at the Stark's table and grow up with his children. Ned raised his illegitimate son Jon as a trueborn alongside his lawful children in his home castle and loved Jon as his own, but he was still careful to not treat Jon with any more attention than his legitimate children because of Catelyn's disdain for him.

Although Eddard was known as being a great warrior and soldier, he never excelled at intricate court politics and usually placed honour before common sense or pragmacy. He had occasionally proven to put his faith in the very wrong people and not consider the long-term consequences of his actions. He sentenced Gregor Clegane to be stripped of his titles after he terrorised 3 villages and was even prepared to name Tywin Lannister an "enemy of the crown" if he did not appear before the royal court to atone for his minion's crimes, ignoring the cries of the council to do otherwise. Almost foolishly, Eddard placed dependence on Petyr Baelish to do the honorable thing by helping him in place Lord Stannis as the rightful heir of the Iron Throne, unaware that Baelish was definitely a megalomaniacal sociopath. As expected Littlefinger had the Queen making a deal with his own man, Janos Slynt, and  betrayed Eddard and his men as soon as Janos and Cersei gave the order to kill everyone.

There has been evidence to support that even Lord Eddard Stark's honour was not omnipotent. Though many people believed he fathered a bastard son, Jon is actually his nephew as Jon (whose real name is Aegon Targaryen) is the son of his deceased sister, Lyanna Stark and Rhaegar Targaryen, who was slain by Robert at the Battle of the Trident. Out of love for his sister and nephew, Ned protected Jon from Robert's wrath by claiming him as his bastard son and raised Jon as his own child from infancy alongside his trueborn children. Ned took the secret of Jon's parentage to the grave to protect Jon and honor his sister's dying wish. This, as well Eddard's falsified statement at the Great Septor of Baelor, shows he was capable of putting family before honour. 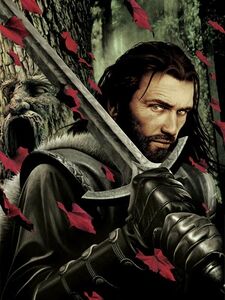 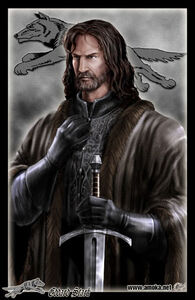 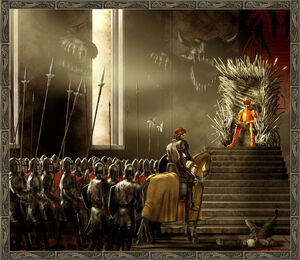 Eddard and his men find Jaime with Aerys II's corpse. 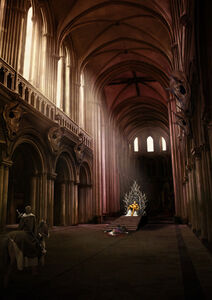 Eddard with Jaime in the Red Keep. 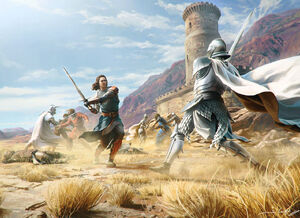 Eddard and his companions, fighting the remaining Kingsguard of Aerys II, at the Tower of Joy. 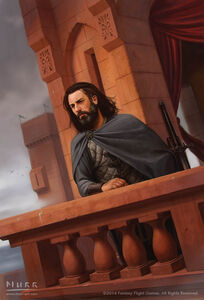 Eddard in the Red Keep. 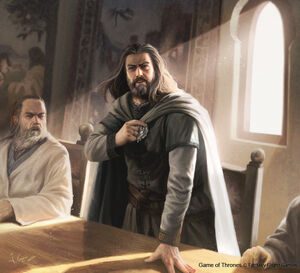 Stark as Hand of the King, in the Small Council. 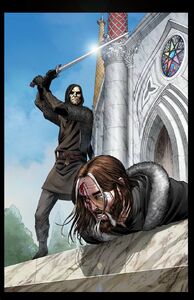 Ser Ilyn executes Ned at the Great Sept of Baelor. 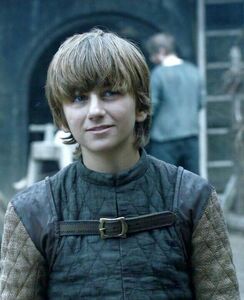 Ned as a child in the HBO series Game of Thrones. 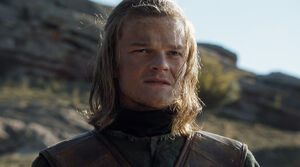 Ned as a young man. 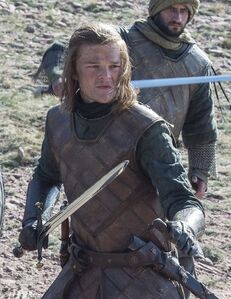 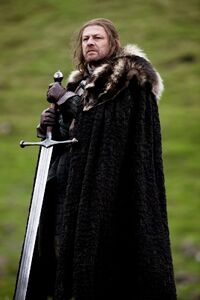 Eddard Stark in the tv series. 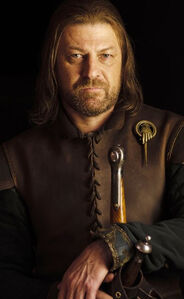